Identification of natural reservoir for Ebola virus was not possible by researchers for decades but recently a scientist named Leroy presented most acceptable evidence that three species of fruit bats called Hypsignathus monstrosus, Epomops franqueti and Myonycteris torquata are wildlife reservoirs for Ebola virus (Biek et al, 2006). Ebola virus is associated with acute fatal hemorrhagic symptoms for human and non-human primates when they get escaped from their wildlife reservoir hosts, Ebola virus is consider as a filo virus and one of the most lethal viruses known the five species of Ebola virus have been identified as Ivory Coast Ebola virus, Sudan Ebola virus, Zaire virus, Reston Ebola virus Ebola and Bundibugyo Ebola virus (Yuan et al, 2012). In the present situation of Ebola virus has a 90% death rate and the main site of first immerging is the region of Guinea’s southeastern forest region and this spilled throughout the entire Africa and some regions of the world (Bausch and Schwarz, 2014).

Ebola virus was first identified in 1976 in Congo of central Africa, It initially named as Zaire as it first found in town of Yambuku and after Yambuku outbreak the virus was vanished, but Ebola reappeared again in 1989 (Draper, 2002).The biomedical scientists first discovered the family of virus filoviridea when Marburg virus first appeared in 1967 and at that time commercial laboratory workers with sever and unusual disease symptoms were admitted to hospital in Marburg, Germany (peters and Ledue, 1999). After the discovery of Ebola it has re-appeared cyclically; most of the Ebola outbreaks are restricted to rural regions in central Africa and have never participated more than 500 cases, first Ebola case were noticed in February in wild areas of south Guinea and it has grown so strongly and spread so rapidly in terms of affected people and earthly spread those are Guinea, large parts of Liberia and Sierra, Lennon are disease ridden (Klenk, 2014).

The virus has persisted in Africa and many fatal outbreaks in human and non-human primates have been reported and the History of Ebola virus is still unclear when doing researches Ebola virus strains with complete glycoprotein genes, including Zaire, sudan.reston, Tai forest, and bundibugya were analyzed (Li and Chen, 2013). After finding the way of coming the Ebola virus to south Africa scientists have found that the virus have always been there in the region but people just never noticed, therefor it has recently introduced then the first report and phylogenetic investigations on the Guinea outbreak proposed that the Ebola virus found in Guinea is a noticeable strain from that observed in central Africa, Therefore Ebola virus is not a newcomer to the region, it has been circulating for some time in Guinea,and have become a sudden threat to human beings (Schwarz, and Bausch, 2014). 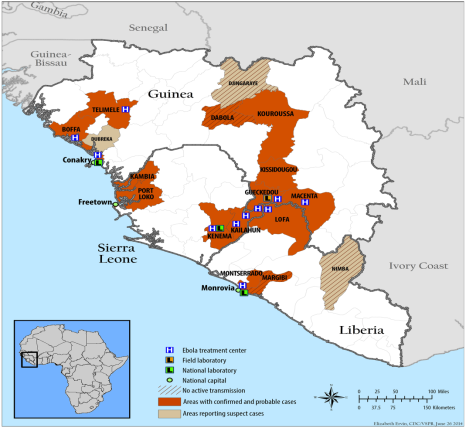 The family filoviridae with order Mononegavirales contains two generas, as Marburg virus and Ebola virus (EBOV) (Kuhn et al., 2012). Ebola virus is again divided in to many species such as Zaire Ebola virus (ZEBOV) Sudan Ebola virus, Ta forest Ebola virus and Reston Ebola virus (REBOV) (Kuhn et al., 2012). VP40 is the major Ebola virus matrix protein and it plays a major role in virus assembly and budding. This virus have a diameter averagely 57 .58 nm and it differ slightly for VP40+VP35 at 63.64nm, VP40+VP35+NP at 66.75nm (Johnson, Bell and Harty, 2006).Ebola virus particle is uniform with uniform diameter of 80 nm but Ebola virus particles are greatly varying from their morphology including long up to about 14 µm, sometimes these particles are branched filaments or shorter filaments shaped like ‘6’, ‘u’ or a circle and the size of this viral genome considered as 19 kb (Cencciarelii et al, 2014). However this fever referred as a group of illness that caused by viruses belongs to diverse range of families which includes Lassa fever, rift valley fever and so on and It may lead to overall vascular damage and usually accompanied by hemorrhage (Ratanshi et al, 2014).

Ebola virus is an invasive pathogen that can cause a highly lethal hemorrhagic fever in both human and non-human beings this virus runs its course within 14 to 21 days and the infection initially present with non-specific symptoms like fever, myalgia and malaise as infection proceeds patients starts to show large bleeding and coagulation deformities including gastrointestinal bleeding, rash and a wide varieties of hematological irregularities (Sullivan, Yang and Nabel, 2014).The initial symptoms of Ebola virus are non-specific, including fever, rash and vomiting, The most generally experienced symptoms were non-bloody diarrhea (81%) and asthenia (77%) and Seven patient reported were observed with hemorrhagic symptoms, and out of seven six of patient died(Roddy et al, 2012).The incubation period after exposure to virus is typically 8 to 10 days but it can be as short as 2 days and extended to 21 days and the net death rate is high as 90%.Most people with Ebola die within 2 weeks of disease onset (Turner, 2014).

Numbers of newer technologies were applied for the diagnosis of Ebola virus infection some of them are antigen detection assay, utilized extensively in the Reston outbreak and its investigation, these methods allowed a fast and unique recognition of Ebola virus in the blood of severly ill individuals even in rural areas also nonspecific detection of antibodies by the unintended fluorescent antibody test in humans during Reston investigation led to the adaptation of the enzyme (Kaslow, Stanberry and Due, 2014). Ebola virus disease can proved with various lab tests depending on the on the stage of the disease, within a few days of infection immunosobent assay, antigen detection tests, reverse transcription polymerase chain reaction (RT-PCR) assay, and virus location by cell culture is used (Plotkin, Oreanstein an Offit, 2008). after the patient get back to normal immunoglobulin M and Immunoglobulin G can be found, after death immunohistochemistry, PCR and isolation of the virus can be done the exact diagnosis can be done by polymerase chain reaction (PCR) and ELISA antigen testing furthermore clarifications on viral replication inside cells can be done through measurements of IgM antibodies ( Plotkin, Oreanstein an Offit, 2008). Diagnosis of Ebola comes in to play when symptoms and signs of fever, illness, petechial rash and disseminated bleeding are observed and most of the accurate diagnosis is done by using a polymerase chain reaction detection assay and can be confirmed by detection of viral replication in Vero cells (Plotkin, Orenstein and Offit, 2008). Ebola is mainly diagnosed from the symptoms and blood test here mainly looks for the presence of antibodies in the virus at earlier days detecting a infected patient was not easy and once recognized the patient must be isolated and relevant authorities should notified (Horobin, 2008).

No effective treatments for Ebola virus at this time. Anti-viral medications currently available have no effect on Ebola virus. Care for patients with Ebola virus infection consists maintaining fluid and electrolyte equilibrium via oral or I.V. hydration, supporting oxygenation and BP, Adjustments of coagulation and treating comorbidities such as a concurrent bacterial infection (Turner, 2014). However without recommended vaccines or treatments Ebola virus management has been limited and barrier methods and prevention methods also become limited but a combination of monoclonal antibodies (ZMapp), optimized from two previous antibody cocktails, is able to rescue 100% of rhesus macaques when treatments is only initiated up to 5 days, High fever, abnormalities in blood count and vireamia were some evidences in animals before ZMapp invention after that advanced disease as indicated by increased liver enzymes, mucosal hemorrhage and generalized petechial could be reversed leading to a full recovery (Qiu et al, 2014). There are no licensed vaccines currently available against Ebola virus but many applicable vaccine platforms have been tested for their efficiency against the virus and this treatment includes exposed or lipid encapsulated DNA, particles like virus arrangements, Vesicular stomatitis virus, strain Indiana, Human parainfluenza virus 3 (HPIV-3) , vaccinia, Venezuelan equine encephalitis virus (VEEV) and replication-deficient human adenovirus serotype 5 (AdHu5) vectors(Richardson et al, 2011). Due to the absence of specific therapies, filo virus ward clinicians give infected patients with the supportive care regime consist of oral medication, oral fluid rehydration, nutritional additives and physiological aid (Roddy et al, 2012).

Ebola virus is considered as one of the most lethal virus found so far and it has extremely high mortality rate therefore according to the doctors and experts point of view anyone who has stayed in areas where Ebola outbreak have recently been reported should have knowledge about the symptoms of infection and seek medical advices at the first sign of illness. Many reasons are there for this highly lethal disease to be spread largely, the most important reason is hospitals lack medical equipment such as surgical gloves, masks and hypodermic syringes to inject medicines to patients and clean water and also the lack of high standard medical laboratories for the medical tests to done on the virus is also a major issue. The spread of knowledge about the Ebola virus is expected to solve another big part of the problem therefore prevention of a worldwide outbreak lies within the education of the virus, how Ebola victims can properly treated and by performing suitable action to isolate the virus before it has spread and maintaining hygienic conditions as much as possible.