The purpose of this project is to figure out if either acids or bases accelerate or decelerate the chemical reaction consisting of dry yeast and hydrogen peroxide. Enzymes are very important to the human body because they speed up chemical reactions without being a part of it. This catalysis isn’t just found in the human body, it’s also in most living things on Earth. Enzymes are made up of proteins which are important biological compounds in the formation of living organisms. The addition of an acid or base to yeast makes a certain amount of bubbles to show how acidity or basicness affects the chemical composition taking place in the reaction with the yeast. If you have ever mixed baking soda and lemon juice in an attempt to fight indigestion, you will see a basic chemical reaction between the two. Without the addition of acids or bases, the yeast reaction is quite harmless to our bodies. However, since we consume acids and bases almost every day, it’s a great idea to enlighten yourself on just how our bodies are working. The main goal of this experiment is to fmd out how well the catalase in yeast breaks down acids and bases or vice versa.

Acids and basses are two very common terms in many scientific fields, such as chemistry. Acids are chemical substances that dissolve some types of metal and turn litmus intro a red color because of them being of a pH lower than seven. They are typically a corrosive or sour-tasting kind of liquid. Bases on the other hand, are usually of a pH higher than seven and are the opposite of acidic substances. They accept hydrogen ions instead of releasing them such as acids do. Bases will also typically turn litmus paper into a sort of blue color.

There are several different types of chemical reactions and changes happening around us in our everyday lives. The most common of these reactions occurs when a raw egg turns solid. This happens because an impressive amount of heat is applied to the raw egg which forms longer and stronger chains of protein molecules inside the egg. This reaction and several others that occur in our body rely on enzymes, which are basically special types of catalysts made up of protein. Catalysts are anything that speeds up an action without being used up themselves. Thus, an acid- base catalysis is the accelerationÂ  of a chemical reaction by the addition of an acid or a base with the acid or base itself not being consumed in the reaction. Enzymes are not only found in human bodies, they are found in all types of living things including yeast. Yeast contains the enzyme known as catalase which breaks down the chemical hydrogen peroxide (H202) into oxygen gas and water. This would be the reaction that will inform us about the amount of bubbles formed from the acids and bases. This reaction will also show us how much the yeast has to work to break down the hydrogen peroxide when different substances are also added onto the concoction. Proteins can be changed when a specific amount of heat is brought upon it. Since enzymes are made up of proteins, they too can be changed by heat. However, what a majority of people do not know, is that the addition of acids and bases can also affect the way that a protein is put together.

The main reasoning behind this investigation is to discover how well the catalase enzyme in yeast can break down hydrogen peroxide after different amounts of acids and bases have been added onto it. For this experiment, my hypothesis is that the more acidic or the more basic the concoction made in the different cups is, the more bubbles will be made and the higher they will get.

The materials you will need for this experiment include: 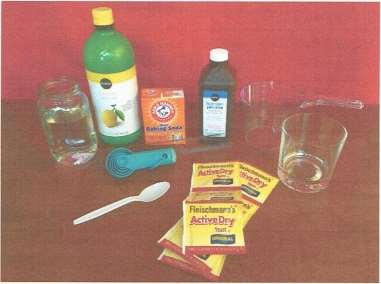 1. The rlcpcndent-ormanipulated variable in this experiment is the amount of lemon juice or baking soda poured into the different containers and thus, the acidity or basicity in each container.

2. The iodepor responding variable in this experiment is the height and amount of

bubbles formed as a result of the chemical reaction.

3.Â  The controlled variable or the variable held constant in this experiment is the amount of yeast and the amount of hydrogen peroxide put in each container and the containers themselves.

2. Put a spoon in each of the containers, and make sure to never move a spoon from one container to the other.

4. Stir in 1 4 cup of hydrogen peroxide to container 1-Control.

5. Stir in 1 teaspoon of yeast to container 1- Control.

6. Place the ruler alongside the container, and record the highest height the bubbles reach

7.Of the other containers, record predictions first, and actual results after on a chart.

9. Add one teaspoon of distilled water to container 2- Low Acid so it is the same volume as con iner 3.

1O.Stir in V4 cup of hydrogen peroxide to containers 2 and 3.

ll.Add 1 teaspoon yeast to both container 2 and 3. Stir and observe.

4- Low Base and two teaspoons of the baking soda solution to container 5- High Base.

14.Add one teaspoon of distilled water to container 4- Low Base so it has the same volume as container 5.

15.Stir in V4 cup ofhydrogen peroxide to containers 4 and 5.

There were a plethora of things to be discovered from this otherwise simple experiment. The very flrst thing that you have to be aware of to do this experiment is that there will always be a change to an altered chemical reaction, no matter how small the alteration or the result. The result of each and every chemical reaction wasn’t very different, but it was enough so that each showed a noticeable change. The temperature for each experiment I conducted stayed at approximately the same level throughout. The original height of the mixture was approximately

1 inch before adding the yeast. I performed three separate trials for each chemical reaction. The results were approximately the same for every trial I conducted of the different concoctions. The initial height of all the concoctions prior to adding yeast was approximately I inch. 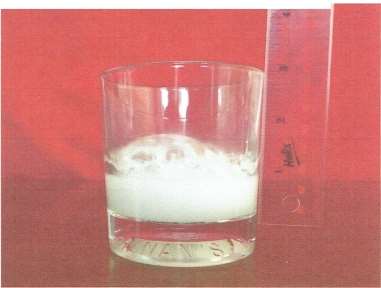 The constant reaction worked at the most accelerated rate, thus causing more bubbles to form on the mixtures surface. This occurred because of the fact that the enzyme Catalase works best at around pH 7, and this mixture was very near to the neutral pH. The foamy bubbles made the height of the concoction reach approximately 1.5 inches in an average whiskey glass. The bubbles reached their maximum height at a slow rate. This was true for a majority of the reactions.

The acidic reactions reacted in a very similar way to each other. The low-acid reaction acted in a very similar way to the control reaction in every single trial I conducted. The bubbles in this reaction reached a slightly lower height than that of the control reaction; approximately 1.2 inches. The pH of this composition was slightly more acidic; about a 6 or 5 on the pH scale. The pH being lower is what caused the bubbles to perform in a more decelerated rate. The high-acid reaction also performed at a lesser magnitude than the control reaction. The height of the bubbles reached a height of slightly more than 1 inch. Due to the fact that the high-acid reaction had a lower pH and strayed further from the desired neutral status, it performed the worst of all the reactions thus far. However, this reaction reached its maximum height in a shorter amount of time. 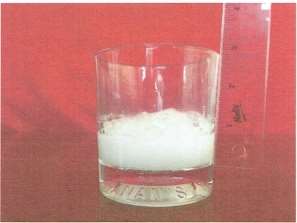 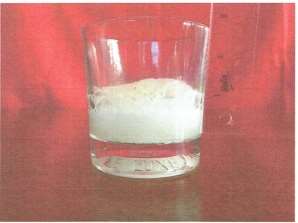 The low-base mixture reacted in approximately the same way as the low-acid mixture. This is because the two mixtures were the same amount of pH away from the desired neutral pH. This concoction was at a pH of roughly 9 or 10. The height ofthis mixture was approximately

1.2 inches. Even though the amount of acid or base added to the mixture was the same, the one teaspoon of baking soda raised the pH more than the one teaspoon of lemon juice lowered the pH because the baking soda is a powder. It being a powder allows for the individual molecules of the substance to spread around the mixture more than the tangy lemon juice could. The high-base mixture reacted in a very similar way to the high-acid mixture. Again, this was because they were the same amount away from a neutral pH. The pH of the high-base concoction was a pH of approximately 11 or 12. The maximum height of this mixture reached slightly more than 1 inch. This blend also reached its maximum height in a shorter amount of time than the others. 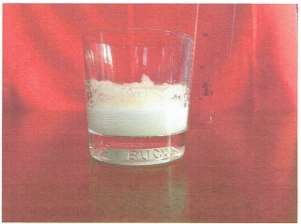 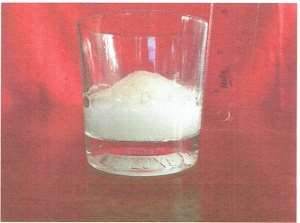 Due to the fact that the different reactions reacted in quite a similar way to one another, I decided to conduct an additional experiment. This one consisted of one teaspoon of lemon juice and one teaspoon of baking soda in the beginning. This was to discover if a mixture of the two would accelerate or decelerate the Catalase reaction. I had previous knowledge that a mixture of baking soda and lemon juice resulted in a foamy liquid that helped with indigestion and to fight off minor cancer cells, so I put it to the test with the catalytic enzyme. This concoction reacted in a way like no other. The maximum height of the reaction was approximately 5 inches. This reaction also reached its maximum height quicker than any other reaction. The initial foam of the mixture of the acid and the base caused the yeast bubbles to be larger and whiter in color in comparison to the other reactions. 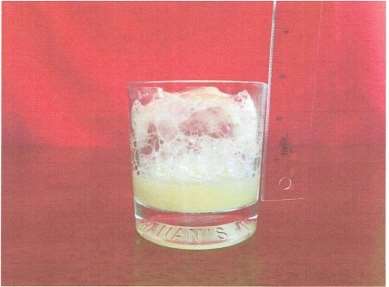