The most common complication of diabetes, distal symmetrical neuropathy (DPN), decreases quality of life and causes disability. Therefore, it hasa significant impact on social and economic aspects. Unfortunately, the treatment of this condition remains challenging because, apart from improving glycaemic control, there are currently no pathogenetic drugs that meet the requirement set by US regulation. This is not necessarily due to a lack of therapeutic potential, but because the endpoints were not robust enough to detect the therapeutic benefit. This essay will address several acknowledged surrogate endpoints (SE) for DPN. Corneal confocal microscopy will also be reviewed as a potential SE for DPN.

Neuropathy, a common long-term complication of diabetes, is associated with the progressive loss of nerve fibres affecting both the somatic and autonomic nervous systems.1 The most common type of diabetic neuropathy is DPN, of which manifestation may vary from painful sensations to foot insensitivity at risk of ulceration.2 In an attempt to treat DPN, clinicians use symptomatic drugs such as tricyclic antidepressants, anticonvulsants, opioids, and opioid-like agents that alleviate painful symptoms in the lower limbs.3 These drugs, however, do not affect the underlying cause of the disease, which is believed to be progressive loss of nerve fibres. Drugs that target putative pathogenesis of the disease, therefore, may become great alternatives. There are currently two main experimental drugs that belong to this group: namely, antioxidant α-lipoic acid4 and aldose-reductase inhibitor epalrestat.5 However, although theyhave been approved in a limited number of countries, they fail to demonstrate sufficient efficacy to be approved by US regulation. This has raised a question about the reason behind this problem. Poorly designed trials, slow progression of the disease, relatively short duration of the trials, strong placebo effect, and endpoints selection are amongst the factors proposed behind this problem.6The latter factor is of particular interest because some of the current surrogate endpoints for DPN assessment may be subjective due to reliance on the patient’s response. Further discussion of SE for DPN will be reviewed below.

In the case of DPN, several endpoints have been used to diagnose and evaluate progression or severity of the disease, including clinical assessment, electrophysiology, quantitative sensory testing (QST),8 sympathetic skin response (SSR),9 quantitative sudomotor axon reflex test (QSART),9, 10 autonomic testing, nerve/skin biopsy,11-13 and corneal confocal microscopy (CCM).14 Clinical assessment of DPN involves assessing the severity of the patients’ symptoms and neurological examination. Most components of this examination rely on patients’ responses and the physicians’ experiences; therefore it has poor reproducibility and marked variation in inter-observer agreement.Dyck15 tried to overcome this problem by developing composite scores that assess the symptoms and signs of DPN. The neuropathy symptom score (NSS) was developed to assess the symptoms, whereas the neuropathy disability score (NDS) was devised as a quantified neurological examination.15 Later, NDS was replaced by the neuropathy impairment score (NIS).16 However, these scores still have a certain degree of subjectivity, meaning the evaluation of disease severity may be biased. 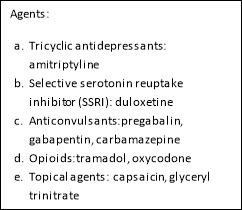 An electrophysiology study measures the electrical conduction along the nerve fibres to evaluate their function. As a surrogate endpoint, it has been criticised due to the need for special equipment and a trained examiner.17 Moreover, there is evidence that it only assesses the function of large fibres,18 yet the earliest fibres affected by diabetes aresmall unmyelinated fibres.12 QST, on the other hand, evaluates both large (A-beta) and small (A-delta and C) nerve fibres. It measures sensory response after the application of accurately calibrated sensory (mechanical and thermal) stimuli.8 However, it has been criticised because it is subjective (based on patient response) and thus cannot differentiate between fake or real response. Due to this reason, QST results are not recommended to be the sole criteria to diagnose DPN. The combination of composite score, electrophysiology, and QST offers a relatively robust tool to define neuropathic severity but fails to detect the earliest stage of nerve damage that happens in small unmyelinated fibres.19

The somatic nerve disturbances due to diabetes are usually accompanied by vasomotor or sudomotor changes that suggest autonomic involvement. QSART examines the sudomotor changes in neuropathic patients by measuring sweat volume produced by skin after chemical10 or electrical stimulation.20 QSART is considered as a robust endpoint for DPN because it is quite sensitive, objective, and reproducible.9, 20 It has been shown to be able to detect C-fibres involvement in DPN patients who have otherwise normal neurological examinations and nerve-conduction studies.10 However, it requires special equipment and needs a relatively long time to be carried out. These drawbacks limit the application of QSART in clinical trials, especially if a large number of subjects are required.

Sural-nerve biopsies and skin biopsies directly assess the damage and repair of small nerve fibres and have been proposed to be surrogate endpoints in clinical trials.11, 12Both of these methods have been shown to be very sensitive in detecting regeneration or abnormality insmall nerve fibres. The quantification of intra-epidermal nerve-fibre density (IENFD) from a skin biopsy, for example, is shown to be more sensitive than QSART and QST in diagnosing DPN.13 Nevertheless, the invasive nature of these procedures may become a problem, especially for diabetic patients.

To solve this problem, anon-invasive measurement needs to be developed. CCM offers a new approach to directly measure the severity of DPN through visualisation of the subbasal nerve plexus in Bowman’s layer of the cornea. The cornea is a highly innervated organ which contains dense A-delta and C-unmyelinated fibres. The question remains whether corneal innervation has a connection with neuropathy caused by diabetes. Recent evidence, however, shows that corneal sensation is impaired in both diabetic21 and galactose-fed rats.22Moreover, in diabetic patients the subclinical abnormalities of corneal innervations23 and corneal ulceration24 are commonly recognised. This is due to the progressive loss of corneal nerve fibres which in turn reduces the neurotrophic stimuli required to develop a healthy and thick corneal epithelium. In 2000, Rosenberg et al.25 found that corneal sensation and nerve-fibre number werereduced in patients with type I diabetes. Later, the degree of corneal-nerve-fibre loss was shown to correlate with the degree of DPN assessed by a combination of NDS, electrophysiology and QST.26 These suggest that diabetes may affect the corneal innervations and therefore it is possible to assess neuropathy through corneal-nerve-fibre evaluation.

CCM assesses corneal nerve morphology by quantifying three different parameters: namely, corneal-nerve-fibre density (NFD), the total number of major fibres per square millimetre; nerve-branch density (NBD), the number of branches emanating from major nerve trunks per square millimetre; and nerve-fibre length (NFL), the total length of nerve fibres and branches per square millimetre.26Quattrini et al.14 provided further evidence that CCM parameters can be used to assess small-fibre damage in humans. Moreover, they found that CCM results correlated with IEFND, which was considered a robust tool to assess small-fibre damage. Later, a study in patients who underwent simultaneous kidney-and-pancreas transplantation showed that CCM was, in fact, more sensitive than IEFND to detect early nerve damage and regeneration.27 The role of CCM is not limited to evaluating the progression of disease;it can also be used to diagnose DPN and identify at-risk patients due to high sensitivity.28 These suggest that CCM may be used as a tool to diagnose, identify at-risk patients, and evaluate nerve-fibre damage or repair.

Recently, CCM has successfully detected corneal nerve damage which correlates with neuropathic measurements in several diseases other than diabetes, such as idiopathic small-fibre neuropathy,29 Fabry disease,30 and Charcott-Marie-Tooth type 1A disease.31The evidence so far shows that CCM may have the potential to be an ideal surrogate endpoint for DPN. It is sensitive, quantitative, highly reproducible, and noninvasive.32, 33However, more research is needed to establish a connection between CCM measurement and clinically meaningful endpoints which, in the case of DPN, are pain, disability, and the curtailment of quality of life.

Apart from the possibility that the tested drug may not yield the intended outcome, the failure to detect the effectiveness of experimental drugsmay, in case of DPN, be caused by improper selection of surrogate endpoints in clinical trials. There are currently several acknowledged surrogate endpoints for DPN, such as clinical assessment, electrophysiology, QST, QSART, SSR, monofilament test, nerve/skin biopsy, and autonomic testing.However, they have several drawbacks, such as being time consuming, subjective, and difficult to practice. Recently, CCM has emerged as a potential surrogate endpoint for DPN because it is non-invasive, highly reproducible, quantitative, and sensitive. However, more research is needed to establish its position as a game changer in neuropathy-outcome assessment.