This meal plan for an expectant mother was designed as firstly the calorie intake required daily is increased to supply the placenta and growing baby the required energy to grow healthily. An estimated 300 more calories in the second and third trimesters. I have chosen foods high in iron and folic acid as these are needed in abundance by both mother and baby. A pregnant woman needs 60mg of protein and 1200mg of calcium I have sought to incorporate this through lean servings of meat and fish daily as well as porridge oats with milk.

Nutrition is an important determinant of health in an elderly person. I chose this meal plan as the meals are low in fat, refined sugar and sodium, and high in essential nutrients such as fibre, vitamins and minerals. Following this meal plan helps the individual avoid gout, stroke, high blood pressure, heart disease arthritis, cancer, respiratory disorders, and difficulty in passing stools, obesity and type 2 diabetes. One major concern in an elderly person is obtaining sufficient fluid intake.

Taking into account average male calorific requirement (2500 calories), this is to be exceeded by around 35 – 65 % based on exceeded average energy expenditure for athletic performance/training as well as a general faster metabolic rate for a teenage male opposed to a mature male. The meal plan incorporates 5 portions of fruit and vegetables a day and a higher than average protein content mostly made up of chicken and fish and only one portion of red meat as to reach the protein threshold from a higher proportion of red meat is deemed generally as unhealthy, causing over a long period higher blood pressure and increased risk of stomach and bowel cancer. Due to the athletic activities to be undertaken there is an emphasis on consuming fluids and an excess and varied selection of carbohydrates is consumed daily. The diet is low in saturated fat and sugar

Type 2 diabetes can result from an inadequate diet, an inadequate diet can be defined as a deficiency, and a deficiency can be too great or too little of one specific food group in a healthy diet. Too much sugar in a person’s diet is a major factor in contributing to the development of type 2 diabetes. Specifically sucrose, sucrose and sugar are not actually required by the body so their consumption can be deemed as a deficiency in itself. Furthermore the excess consumption of sugar can lead to an increase in weight and obesity which in turn increases the likelihood of developing type 2 diabetes. Higher than normal blood glucose levels cumulatively over a long period leads to insulin resistance.

Atherosclerosis, the clogging of the arteries can be a secondary effect of having type 2 diabetes but in most cases is caused by too high a fat content in one’s diet, more specifically consuming too much saturated fat often found in processed foods and a lack of unsaturated fats with high density lipids and beneficial cholesterol lowering effect on the body. A diet with a frequency of fruit and vegetables has a negating effect as well as oily fish, nuts and seeds, sunflower and seed oils.

Rickets is usually caused by a lack of vitamin D and/or calcium. Physiologically most of our vitamin D comes from sunlight not our food and the process of calcium absorption is very dependent on vitamin D levels in the body. However we do garner some vitamin D from food. Eggs, oily fish and cereals are all good sources of vitamin D and deficiencies in these food types regardless of UV exposure could contribute to the onset of rickets. Milk and other dairy products have the highest calcium content and a lack of dairy as well as green vegetables such as broccoli and cabbage can have a detrimental effect on calcium uptake in the body. 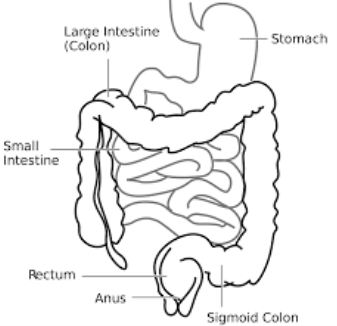 The digestive tract, consisting of the stomach, small and large intestines. The stomach is made of three layers of smooth muscle fibres, an outer layer of longitudinal fibres middle layer of circular fibres and an inner layer of oblique muscle fibres. This arrangement allows for the churning effect of gastric activity.

When the stomach is empty the mucous membrane lining is thrown into folds or rugae when the stomach has contents these folds are ironed out.Numerous gastric glands are situated below the surface in the mucuous membrane.

The small intestine also has layers,the peritoneum is a double layer and connects the jejunum and ileum to the abdominal wall.The attatchment is short and fan shaped,large blood vessels and nerves pass between the two layers.Their is also a mucousa present here it contains villi and microvill it has a large surface area and many folds.Their are circular folds which act to mix chyme,the villi in this mucousal layer contibute to final stages of digestion.There are also lymph nodes within the mucousa which release defense cells against ingested antigens.

The muscularis layer surrounds the submucosa and contains many layers of visceral muscle cells that contract and move the large intestine.

Finally, the serosa forms the outermost layer. The serosa is a thin layer of simple squamous epithelial tissue that secretes watery serous fluid to lubricate the surface of the large intestine. protecting it from friction between abdominal organs and the surrounding muscles and bones of the lower torso.