The physical processes involved in surface plasmon resonance (SPR) phenomena were first reported by R.M. Wood in 1902 [1]. In this work, Wood observed a repeated pattern of dark and bright light bands in the reflected light, when he irradiated polarized light on a mirror with a diffraction grating on its surface. The physical interpretation of SPR mechanism was first initiated by the British physicist Lord Rayleigh [2], and further refined by Fano [3], but its satisfactory explanation was not available until 1968, when Otto [4] and in the same year Kretschmann and Raether [5] reported the excitation of surface plasmons on the metal/dielectric interface. Its first use in a real-time analysis of a biological system was demonstrated in 1990s by Karlsson et al. [6]. Since then, The SPR has become a crucial optical sensing technique in the areas of biology, microbiology, biochemistry, and medical sciences because of its noninvasive nature [7].

The commercially available SPR based devices are not so cost-effective and require consumable sensor chips demanding certain specifications of size, thickness, effective sensing area and so on. For example, The Biacore (acquired by General Electric Healthcare in 2006), a life science products company, are providing a variety of models of SPR-based instruments (a typical cost of $120,000–$250,000) that exhibit compatibility only with expensive Biacore accessories. Moreover, the associated high operational cost inhibits introduction of SPR technique into laboratory classes at the undergraduate or postgraduate level. In addition to that, the commercial SPR instrument is not a good teaching tool because all the components, of the apparatus, are enclosed, thus preventing the students from visualizing the details of the SPR instrumentation.

The primary motivation behind the present project work is to develop a low-cost SPR based multipurpose optical sensor especially intended for undergraduate and postgraduate education and Research. The proposed homemade SPR sensor is supposed to be cost-effective, and whose all components would be accessible for visualization and manipulations in future. The presented design not only allows its integration with various other mechanical and electronic add-ons, but also could prove to be an ingenious teaching tool for the students to understand and appreciate the modern instrumentation. In addition, once developed, this instrument could also serve the Research purposes of general chemistry, biochemistry, physical chemistry, Nanotechnology and Material Sciences.

For this purpose it was necessary to arrange low cost experimental components but keeping in mind that these components work well to satisfy our purpose. It took a long time first to decide the components, and then taking overviews from various places regarding the type of component available and the price of that particular component. After comparing and analyzing the need and price of whole set-up the components were arranged from different market places.

After arranging the components it was necessary to prepare the experimental set-up in a well mannered way to fulfill our purposes. Again it took a long time to arrange them in a dark room (as we were working on light and its intensity measurement) as to get a well observable result. The most difficult and time consuming task was to produce a thin metallic film on the glass slide of a specific thickness to get a better result. Metallic film was of gold and the coating unit was a magnetron sputtering gold coater available in the department of the institute. Initially it was a difficult task to coat the glass slide of specific thickness, for which we coated various glass slides with different thicknesses using variable coating time of the coater. Then we did the experiments with that thickness but didn’t get the results. Then glass slides were again coated to increase the gold film thickness. This process was repeated various times and at last we were succeeded to produce the results from the glass slides of different thicknesses.

In this dissertation work, we first introduce the principle of Surface Plasmon Resonance and other associated phenomena. Following the introduction part, we describe some literature reviews in next section of report. We further describe the details of the crucial components that would be used in the development of SPR based Sensor or can be termed as the Experimental Set-up for the Surface Plasmon Resonance phenomenon. The very next section contains the soul of the whole report or the Results, mentioned as results and discussion. We finally conclude the report by enumerating the work done so far, the future course of work followed by the References that have been used for the literature survey.

SURFACE PLASMON RESONANCE(SPR): The resonant oscillation of conduction electrons, at the interface between a metal and dielectric, stimulated at the optical frequencies is called the SURFACE PLASMON RESONANCE (SPR). This resonance condition is satisfied once the incident photon frequency matches with the natural frequency of surface electrons, which are oscillating under the action of restoring force of positive nuclei of the metallic atoms. The resonance phenomena has been shown to have many applications such as in Gas detection and immune-sensing [8,9], efficiency enhancement of Solar Cells [10], and Magneto-Optical based imaging etc. [11,12]. Figure 1 shows a typical surface Plasmon resonance set-up which consists of a light source, prism, gold film, and a detector.

SURFACE PLASMON POLARITONS (SPP) wave -The surface electromagnetic waves, propagating along the metal/dielectric or metal/vacuum interface, is known as SURFACE PLASMON POLARITONS (SPP) wave. As the SPP wave is propagating along the boundary of the metal and the external medium (air or dielectric), the aforesaid resonant oscillations become extremely sensitive to any change occurring at the boundary, for instance the adsorption of molecules to the metal surface or change in refractive index at the metal-dielectric surface. Thus the sensitivity associated with metal – dielectric interface can be exploited to obtain a non-destructive and cost effective multipurpose sensor for detection of Chemical and Biological species. According to different literature [9,12], the sensing properties has been quite useful for monitoring food quality, safety analysis, medical diagnostics and environmental changes etc.

A typical SPR sensor consists of a dispersive element, such as prism or a plane reflection grating, coated with a metallic layer (Gold) and a dielectric layer (usually polymers or bio molecule layers). The Kretschmann configuration, as shown in Figure 2, is often used in most of the SPR sensor applications, where a metal (typically silver or gold) film is placed at the interface of two dielectric media. The medium 1 with higher refractive index (n1) is a prism and the medium 2 with lower refractive index (n2) can be the air or the dielectric of interest. A collimated p-polarized light beam, entering from the glass side undergoes a total internal reflection and interacts with the metallic layer at the critical angel of incidence (as shown in Figure 2). The surface plasmons (SP), at the metallic surface, are excited at the resonance optical frequency resulting in absorption of a part of incident light energy and hence leading to a sudden drop in Reflectance at a specific angle ï±0 adjacent to the critical angle ï±C. The resonance condition of the SPs is sensitive to any change in the refractive index of the metal-dielectric interface and leads to shift of ï±0 to a new angle ï±1 (Figure 2). The change in the intensity of reflected or diffracted light or its wavelength or angular spectrum can be monitored using a charge – coupled device arrays or photodiode arrays, for different sensing purposes [13-16]. 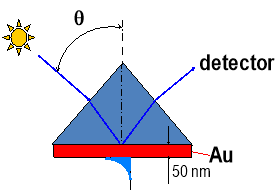 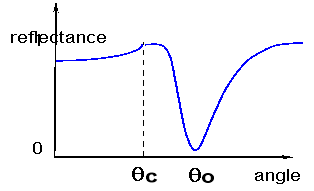 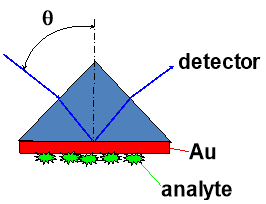 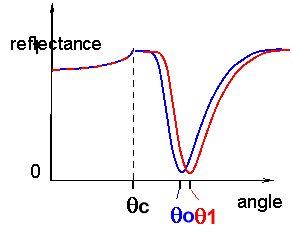 When the light travels from the higher refractive index medium 1 (glass) to the lower refractive index medium 2 (air or dielectric), the total internal reflection (TIR) takes place within medium 1 for the incident angles θ greater than the critical angle θC, satisfying the Snell’s relation Sin (θC) = n2/n1. The Evanescent waves, a near-field wave, are produced in the lower refractive index medium 2 (air or dielectric) under the TIR condition. As the meaning of “Evanescent” is “tending to vanish”, the amplitude of evanescent waves decays exponentially with the distance from the point of incidence, to the interface of the media 1 and 2. When a nonmagnetic gold film with a suitable thickness is sandwiched between the media 1 and 2, the amplitude of evanescent wave is enhanced, penetrating in the gold film and also existing simultaneously in the medium 2. Using the well known Fresnel’s relations, magnitude of the parallel wave vector of the evanescent wave, 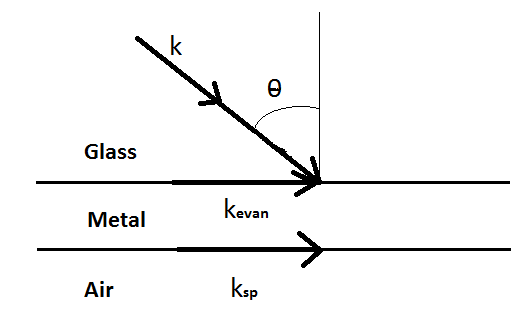 Figure 3: Schematic diagram showing a layer system of surface Plasmon resonance where kevan and ksp are wave vectors given in equations.

Surface plasmons (quanta of plasma), are the surface electromagnetic wave travelling along the limited region of metal–dielectric interface. The magnitude of the wave vector

can be obtained from n2 and ng using the following relation;

, at which SPR occurs, can be determined by below relation,

at which the minimum reflectivity is observed is called the SPR angle. The angle

has been found to be slightly larger than the critical angle

. It is clear from above expression that the angle

is linked to n2 if n1 and ng are kept fixed. Hence, even a slight change in the refractive index of interfacial region is reflected in a significant change in the angle

. For instance, the phenomena of adsorption and desorption of any gas, on the gold surface, changes the refractive index of media 2 near the metal–dielectric interface leading to change in the

. Therefore, the monitoring the change in the angle

can be used, as a technique, to study and analyze the adsorption– desorption or association–dissociation phenomena taking place on the gold surface. The refractive index, in the interfacial regime, changes with the mass and density of foreign species attached to the gold film surface. As a consequence, monitoring the change in the SPR angle provides information about mass and density change on the gold surface, effectively within 200 nm from a metal surface.

As mentioned above the surface Plasmon resonance will occur when,

Also from the above discussion we know that the

is a function of three parameters.

is a function of three parameters,

So we get five different parameters which can be used as varying parameters to get the optimum condition of Surface Plasmon Resonance which are,

Figure 4: Shows relationship between absorbance of reflected light and the wavelength of incident light.

In angle interrogation Surface Plasmon Resonance device, incident angle of light is varied whereas the other parameters including wavelength of incident light, refractive indexes of medium 1, medium 2 and medium 3 are kept constant during the whole experiment. In this case there is a variation in the intensity of reflected light with variation in angle of incident light as shown in figure 5. 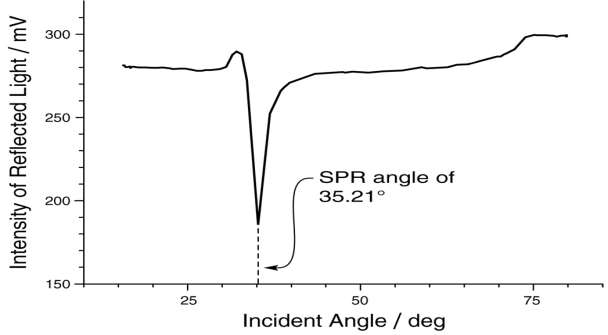 Figure 5: Diagram indicating the relationship between intensity of reflected light and incident angle.

The one other and most complicated interrogation system is phase interrogation Surface Plasmon resonance device in which phase of the reflected light provides the information about the metal dielectric interface. Very less work has been done in this field and is a good topic to work on in future as angle dependent reflectance measurement and other methods discussed above are limited for detecting low weight molecules on the metal dielectric surface. 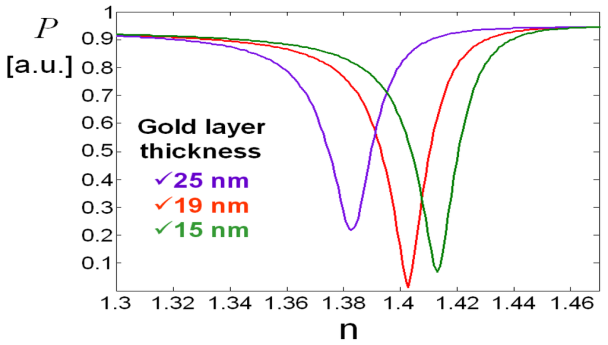 Figure 6: shows relationship between intensity of reflected light and refractive index of the medium with three different gold film thicknesses.