The AmbiLight system is a Car Environment Light System (CELS) designed to dynamically adapts to the driving situation and enhances the orientation and perception of the passenger compartment in vehicles. Light sources are integrated in the roof liner in-order to create the ambience. These light sources are fed with colour information by the scanning devices attached to the vehicle to capture the colours of the outside environment. Hence, the colour of the light emitted by the lightings in the roof liner can dynamically adapt to the outside environment in real-time. Thus, the CELS provides an enlargement of the visual perception. In particular, the effect is created as the colours displayed by the lightings correspond to the view from the window. Therefore, by looking out of the window, one perceives the coloured light as an extension of the window. 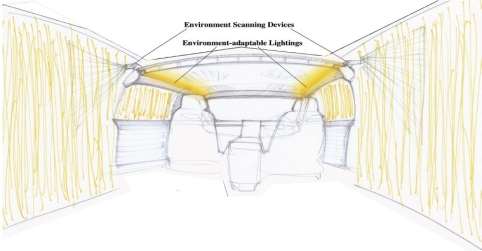 This thesis is part of the TUM CREATE joint research programme. The programme is funded by the National Research Foundation of Singapore and executed by the two universities, namely, Technische Universität München from Germany and Nanyang Technological University, Singapore. Apart from other research topics, one of the major goals of TUM CREATE is to design and build the world’s first purpose-built electric taxi.

The AmbiLight system will also provide the driver and the passengers a pleasant spatial atmosphere thereby creating a feel-good experience psychologically. It also improves the orientation within the vehicle, facilitating the search for things.

The below section will cover the design of the Car Environment Light System (CELS). The general system structure of the CELS is also specified.

Fig.1 Architecture of the AmbiLight system

The design of the Car Environment Light System comprises of camera(s), a computer, a micro-controller unit (MCU) and LED strip which act as the colour display. The camera(s) take images of the car’s surrounding environment. By running a program the computer will acquire and process the images that are captured by the camera(s). The program also determines the representative colours that will be emitted by the LEDs by means of several implemented calculations. The LED-strip is mounted in the roof liner of the car. This arrangement in conjunction with the correspondence of the light colour results in the perception of a larger view.

1. Design of the Input Component

This section discusses the realization of the input component. Also the input data types are also discussed.

In order to create the enlargement of the perceptual view, the CELS needs to adapt to particular changes in the environment. This comprises of the illuminance, colour and motion. Thus, images as holistic visual information have to be considered to function as CELS input data. Cameras are used since they satisfy the requirement of providing images of the present.

Google provides different online services such as Street View which systematically takes and saves images with its geographic parameters, like the GPS coordinates and the cardinal direction. Hence these images can be utilized in a deliberate manner [Goo12]. The Street View data base covers most of Singapore’s streets, hence permitting the possible operation of the CELS.

Summarizing, apart from cameras, Google Street View can also be used as a input device providing real-time input data for the CELS, if the vehicle movement is defined as the only changing parameter.

Since the Street View images are stored online, access to the internet must be ensured. In general, this does not present a big challenge, as the automotive human-machine interface, which was presented in Section 1.5, provides internet access via a 3G connection. However, the use is still problematic due to the risk of low connectivity or even complete loss of either the mobile or the GPS signal. This would result in asynchronous data, which obviously deteriorates the pursued effect.

But, relying on Google Street View implies a disadvantage. Buildings are generally not frequently teared down and constructed again. Walking people and driving cars for instance however are in motion, hence are not considered by the Street View images. The designed CELS, being the first prototype, the achievement of the maximum effect possible is preferable. Consequently, the dynamic features of the environment have to be considered in the calculation of the representative colour. Otherwise, the enlargement of the visual perception could be impaired. Due to this fact, the input component has been realized with a camera.

2. Design of the Processing Component

3. Design of the MCU

For the processing unit to communicate with the output device, here, the LEDs of the LED strip, a MCU is used. Its task is the communication with the LED drivers via the SPI bus. For this purpose, the Arduino board has been used. It is an open-source computing platform which is based on a microcontroller board” [Ard13] and is illustrated in Figure 5.1. In particular, the used Arduino Uno model utilizes the 8-bit ATmega 328 microcontroller from Atmel Corporation. Apart from other features, the ATmega 328 has a 16 MHz processor and 32 kBytes of programmable flash memory [Atm12]. Moreover, it supports the required SPI interface. An integrated UART enables the RS-232 serial communication with the computer. 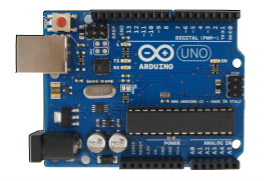 4. Design of the Output Component

LEDs are suitable for interior lightings due to their minimal size, long service life, low power consumption and also quick response. The specification of the LED-strip is discussed in the following section.

In order to achieve the necessary colour environment adaptation, the LEDs need to be capable of emitting different colours. For this purpose, the LED strip that utilize RGB-LEDs that is able to display up to 16.7 million different colours by mixing the three primary colours red, green and blue is chosen.

The LEDs of the LED-strip are individually addressable to enable a smooth light colour adaptation over the whole roof liner. This enables the control of both the brightness and the colour of each LED.

To avoid the necessity of additional devices such as voltage converters, the compatibility to the 12V auxiliary power grid is preferable.

LPD8806 LED driver has been used. It offers SPI communication interface having a LED density of 32 LEDs/m

Two parameters have been taken into account for determining the Amount of LEDs. They are

32 LEDs per meter or a LED distance of 31.3 mm has been assumed for the calculation of the total amount of LEDs.