This laboratory involved using photometry of the images of M28 which were obtained in R and I filters from ULO’s robotic telescope, hence determined the magnitudes of calibration stars and the new discovered supernova. In addition, compare the experimental results to the published AAVSO data by investigating the time series of data within the night of 23rd and 24th of January.

Supernova are basically the explosion of massive supergiant star when they are reaching the end of their evolution. In general, supernovae can be classified as type I and type II supernova, each of them has its own specific features and dynamics. Type Ia supernova are generally thought to a white dwarf explosion and type II supernova are triggered by a core collapse of massive supergiant stars. Astronomers use type Ia supernova as a “standard candle” to measure the cosmic distances because they are very bright which can be seen at great distances and they all are observed to have similar brightness at their peaks.

Light curve is one of the methods that astronomers use to identify different types of supernova. It is constructed by plotting the magnitude of the supernova as a function of time after the event of explosion. Type I supernova have very distinctive light curve compare to type II supernova. The figure bellow shows that type I supernova light curves exhibit a sharp increase to a maxima and then decrease steeply, eventually die away smoothly and gradually whereas type II supernova have less sharp peaks at their maxima and they have another peak later on after the first peak. 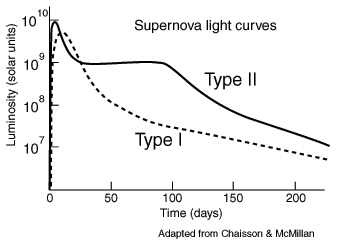 Supernova SN2014J was discovered in the galaxy M82 on 21st January 2014 at ULO. Early studies of SN2014J light curve and spectrum indicate it is a type Ia supernova meaning that its light curve would have a peak absolute magnitude around the same value and it follows the general shape of type Ia light curve.

In the laboratory, we can determine the magnitude of the supernova and plot the result to AAVSO database to see if it fits the published data and follow the trend of typical type Ia supernova light curves, whence to predict the peak brightness and its magnitude.

I first downloaded and printed out the list of standard stars’ magnitudes from the AAVSO website which was used for reference throughout the laboratory. I also obtained the subset of the images of M82 from ULO’s robotic system by selecting only Rc and Ic filter’s image as well as the time range from 21:29 to 21:35 on the date of 23rd of January 2014. These images were opened and analysed with GAIA’s aperture photometry tool. I analysed the Ic images first in GAIA.

Before making any magnitude measurements of stars, the brightest stars were checked to make sure they were not saturated and all the given star in AAVSO list don’t have peak count over 40000 counts. These must be done to get reliable results. In order to measure the magnitude, a suitable aperture needed to be drawn on the image and it should be in the size about two to three times the full width at half maximum (FWHM) of a star image. By using the slice tool, a graph of the selected star was opened in a new window where the FWHM could be measured. Determined FWHM of several listed stars and calculated the mean value, hence the aperture was set to three times the size of FWHM.

When the aperture was set to a suitable size, I clicked the “define object aperture” button and placed the aperture to stars in the same order as they appeared in the AAVSO reference data. At last, dropped the aperture in supernova as well.

After all, I collected my results by clicking on “Calculate results” button. These results were then save in a excel file for further analysis.

Repeat the same procedures for Rc images and also save all the results in the same excel file.

Calculated FWHM for making the judgement of the size of aperture:

Thus, I set the aperture as size 12 and placed it to each star to make a measurement. On my downloaded images for both Ic and Rc filter, star 155 and star 159 did not appear on them which lead to no measurements were taken from them.

Results of Ic image and Rc image were tabulated in table 1 and table 2.

Both of the tables have their first column listing all the known standard star from the reference data and supernova is also included. The column with heading of Sky is the values of sky annulus which are used to measure local background sky values for each star. And the last column is the signal from a star which is used to calculate magnitude and constant k of the star as well as the supernova.

To estimate the magnitude of supernova, several calculations were carried out by using the equation:

The constant k was first calculated from known reference stars on the list and hence the mean value of constant k for both Ic and Rc imgaes. Then both Ic and Rc apparent magnitude of supernova were determined. All these values were tabulated in table 3 and associated uncertainties showed in table 4.

Uncertainties on k and apparent magnitude were obtained by using the following equation:

Where N is the signal obtained from an average of n images, and 2.53 is called the ‘gain’ of the CCD.

And finally, the combined uncertainty becomes:

Table 3. Results of calculated magnitude and constant k for both Ic and Rc imgaes

4.3 Q5. Compare table 3 and the reference list, we can see that there is no obvious trend for constant k (both Ic and Rc) varies for standard star colours as well as standard-star magnitude. In the reference list, standard star colours such as B, V and B-V increase in their values following the order of the stars from 106 to 156, however, values of constant k fluctuates with different values of star colours but not follow any increasing or decreasing trend.

This laboratory is to analyse and make magnitude measurements of the known stars from images of M28 which were obtained in R and I filters from ULO’s robotic telescope by using the aperture photometry tool, hence determined the magnitudes of the new discovered supernova. At the end of the laboratory, experimental results were plot in the light curves from AAVSO data so we can investigate the time series of data within the night of 23rd and 24th of January and more importantly, to predict the time that the supernova reach peak brightness and magnitude when Rc and Ic images were taken.

Table 6. Results of magnitude both Rc and Ic by different students.

4.4 Q1. Table 6 shows all the laboratory results obtained by different groups of students. My calculated results for the Ic and Rc magnitude of supernova in the time range 21:29—21:35 are 10.04 +/- 0.02 and 10.54 +/- 0.03 respectively. Compare my results with those obtained by other students, I cannot conclude that out results are not consistence because the uncertainty for my Ic and Rc magnitude are +/-0.02 and +/- 0.03, but the difference in magnitude between students is about +/-0.1 which is not within my uncertainty range, thus the results did not maintain the consistency.

4.4 Q2. Because the great consistency of the results obtained from different groups of students, we can say the magnitude of the supernova is around the similar value at the time the images were taken. There is no obvious trend observed for the magnitude to change with time during that night, also, the condition of the sky was thought to be not vey ideal, thus the we cannot conclude that there is a change in brightness at the night of 23rd January to 24th January 2014. However, from the general shape of light curves of supernova, there should be obvious brightness change before and after peak. So, more reliable results should be obtained for plenty of nights to detect the change in brightness.

4.3.1 Q4. Table 4 listed majority of the uncertainties that can possibly be calculated from my results. They are relatively small compare to the large values of my results. However, there were also systematic uncertainties arising from the measurement of the background galaxy light. This is related to the size of annulus when I did the aperture measurements. The annulus is used to measure the background of the sky by drawing a larger circle and a smaller circle around the centre of the star. The background is therefore the region between these two apertures or the annulus. If the aperture is oversized, extra light from neighbour stars will be included which can cause unreliable results of the measurement as it introduces noise from the sky background, thus the signal strength from the star fluctuates as well.

To check this uncertainty, I adjust the inner scale and the outer scale of the annulus to make some measurements of a star. The results were tabulated in table 5.

Table 5. Results of aperture measurement with different size of annulus

By trying different set of inner and outer annulus scales, the signals were very different to the one I obtained in the first stage. To mitigate them, multiple aperture with different size within the range about 2 to 3 times the FWHM can be used to make more measurement. This would give a more reliable signal strength of the star. 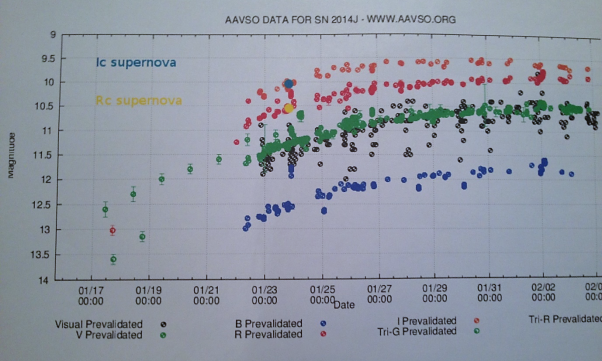 Figure 1. Light curve of SN2014J from AAVSO with own data plotted

Figure 1 is the light curve that I downloaded from AAVSO for SN 2014J with my results plotted on. My results for Ic and Rc magnitude were plotted in blue and yellow respectively. My data actually fits the AAVSO data, both of the magnitude are on the light curves at the same time on the night. We can spot that there is a trend from the AAVSO data from the same night at ULO. Both of I and R light curves show an increase in magnitude with change in time meaning that the supernova was brightening during the night at 23rd of January 2014.

As mentioned previously in introduction, the shape of typical supernova Ia light curves exhibit a sharp increase to a maxima and then decrease steeply, eventually die away smoothly and gradually. Combine this information to the plot from AAVSO, there is a sharp increase from 17th to 23rd of January, and the magnitude gradually increase until reach its peak at around the date of 29th to 30th of January, and even the data is up to 4th February, we still can observe that there is a slight decrease in magnitude after 31th of January. We can say the magnitude at peak is about 9.5 for Ic and 10 for Rc.

Throughout the whole observation, colour dependent extinction were not allowed by the Earth’s atmosphere. Basically, the extinction effect varies from night to night and the coefficient of extinction depends on wavelength and on different altitude. As the data was obtained from just one night, the extinction should not vary too much and for the wavelength dependent, different filter needed to be used to maintain a good accuracy of photometry, in this case, red and invisible filter were used. And the extinction is corrected by calculating the magnitudes outside the atmosphere. This can be the reason to cause the fluctuation of our measured magnitudes.

In conclusion, I got the magnitude of SN2014J in Ic and Rc filter are 10.04 +/- 0.02 and 10.54 +/- 0.03 respectively within the time range 21:29—21:35 on the night of 23rd of January 2014. These data exactly follow the trend of the light curves of SN2014J obtained by AAVSO website at the same night. However, results gathered from other student in the same group didn’t show an obvious change in brightness of the supernova whereas the light curve did show that there is an increase in magnitude on the same date.