Phenylbutazone (C19H20N2O2 see figure 1 below) is a non-steroidal anti-inflammatory drug. Bute as it is more commonly known, is widely used for the treatment of bone, joint and soft tissue inflammation in horses. It was used in the treatment of ankylosing spondylitis in humans, but after serious issues and side effects was withdrawn. 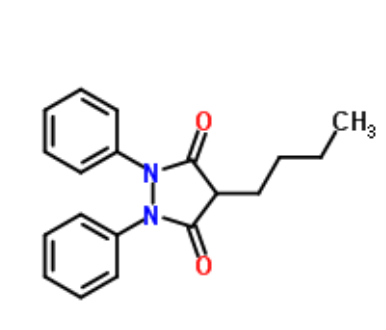 As with most drugs Phenylbutazone has legal uses and also illegal uses. Despite Bute’s significant and anti-inflammatory effects, it has the capacity to affect racing performance in racehorses.

The various racing regulatory bodies have varying permitted limits in pre and post-race samples, as they respect the need to discriminate between doping and the genuine therapeutic use of the drug. Figure 1.

As such the need for stringent and accurate testing is crucial. There are various methods of testing and it is dependent upon the sample type which is best to use. Sampling in itself has issues blood tests are very invasive, but on the other hand gaining a urine sample is very awkward and hazard prone.

When food has been withheld from the treated horse for between 3 and 4 hours, before and after being dosed with PBZ, the maximum concentration in plasma according to (Maitho, Lees and Taylor, 1986), occurs at 4 to 6 hours. If the horse as constant access to fed, there is a small initial peak in in plasma concentration after 1 to 2 hours. This is then followed by a much larger absorption phase from 10 to 24 hours, which gives it a Tmax (amount of time that a drug is present at the maximum concentration in serum) of 12 to 14 hours.

(Lees et al., 1986), explain that the distribution of PBZ from plasma to interstitial and trans-cellular fluids is limited, with the distribution volume being small 0.1 – 0.3 L/kg. Even though distribution is limited, it reaches sites of acute inflammation easily; this may be accountable to increased blood flow in the area and increased capillary permeability.

(Rowland and Tozer, 2005), indicate that the distribution of the drug bound to plasma protein, in plasma, in extracellular fluid and in the rest of the body can be predicted. This is done by taking into account the fu (free fraction in plasma). In horses, the fu is 2% and the volume of distribution 0.17 L/kg. Using these figures Rowland and Tower, 2009 predicted that 29.4% of PBZ in the horses’ body will be in the plasma, 45.5% being present in the extracellular fluid and only 25% in the remainder of the body.

(Authie et al., 2010), showed that renal clearance contributed to PBZ elimination. They found that elimination was shown to be similar at rest, 11.2% and at exercise, 12.9%.

PBZ is lipophilic molecule, as such some of the drug is subsequently reabsorbed. As a result of this the urine, plasma concentration ratio in horses is low at around 2:1, (Gerring, Lees and Taylor, 1981).

(Grippa et al., 2000a) used HPLC (Reversed phase) to determine the presence and quantity of PBZ in equine serum. The serum was mixed with an internal standard, evaporated, re-suspended and then analysed, using a C-18 column which had been calibrated using acetonitrile/water/trifluoroacetic acid. The (Grippa et al., 2000a) method had a LOQ (limit of quantification) of 0.5µg/ml and a LOD (limit of detection) 0.5µg/ml.

This method is only for the determination of the presence of PBZ. The only detector mentioned is a UV monitor which would simply say if it was present but not in what quantity it was is present.

If an MS (mass spectrometer) was attached however, the PBZ could be quantified as well.

There are however disadvantages to HPLC-MS and these are mainly associated with the MS. The molecular weight is not sufficient for identification and fragmentation is required. This can be achieved using MS-MS instruments such as triple Quadra-pole or ion trap. It can however only analyse volatile components

The MS-MS works in two stages. The 1st stage MS isolates ion of interest and fragments and the 2nd stage produces mass spectrum of fragments.

(Meucci et al., 2013), developed a new analytical method for detecting and quantifying PBZ in equine plasma. The technique is based on electrochemical sensing, they used disposable graphite based screen printed electrodes and DPVs (differential pulse voltammetry) for detection after the sample has gone through the MISPE (molecular imprinted solid phase extraction) procedure.

Liquid Chromatography Electro-Spray Ionization Mass Spectrometry (LC–ESI-MS) can also be used as a detection method after elution from the MISPE (Harun, Anderson and Cormack, 2010).

The accuracy of the (Meucci et al., 2013) method was shown to be more than 94% at 3 different concentrations. The LOQ (limit of quantification) was 0.01µg/ml and the LOD (limit of detection) was 0.005µg/ml. There method was validated using HPLC and the correlation of results was found to be r2 >0.999.

This is a new method and with a new method comes criticism and the need to iron out the little flaws etc. This method has however been validated in comparison with HPLC.

(Gonzalez et al., 1996) method uses GC-MS to detect the presence of PBZ and OPBZ in equine plasma. Samples were prepared using an internal standard and the pH was adjusted to between 2 and 3. After missing and centrifugation, separated and evaporated to then undergo derivatisation. Helium was used as the carrier gas and the column was fused-silica cross-linked with methyl-silicone. The temperature of the detector and injector port was at a constant 280°C, whereas the oven temperature was increased from 100°C to 200°C and then onto 300°C.

The LOD (limit of detection) for PBZ was 10ng/ml and for OPBZ 25ng/ml. The problems with GC-MS are mainly associated with the GC not the MS, these being that it can only analyse volatile components and most controlled substances i.e. drugs have to be derivatised prior to analysis.

Elisa screening for drugs is a particularly sensitive and quick way of identifying if a drug is present. Due to the sensitivity of immunoassay screening, ELISA is usually used as a kind of ‘presumptive’ test before going ahead with the more expensive methods. Randox life sciences have developed an ELISA specifically for Phenylbutazone and Oxyphenbutazone (Kwiatkowski et al., 1989). It has an LOD of 2.01ng/ml and a calibration range of 0-90 ng/ml. Sample preparation is minimal with only a dilution required before the test can be performed.

Initially due to the high sensitivity and relative cheapness of the test I would first perform an ELISA to confirm the presence, provided enough sample was present. Providing a ‘presumptive’ positive had been gained, the preferred analytical method to detect PBZ in horse blood samples would then be the MISPE, (with Electrochemical-based sensing coupled to selective extraction with molecularly imprinted polymers method). Because it outranks even the gold standard techniques for ease of use and results gained.

Method validation is the process of proving that an analytical method is acceptable for its intended purpose. Specificity, linearity, accuracy, precision, range, limit of detection, limit of quantification and robustness are all guidelines for validation.

The electrochemical-based sensing method was compared with HPLC reference analysis in order to validate the method. The PBZ content of various spiked equine samples was tested using the two methods after the sample had been extracted using the MISPE procedure. The study’s findings with voltammetry-based sensing showed very good agreement with results obtained by HPLC analysis.

Statistical tests on the data at the 95% significance level generated a correlation line with the following equation and correlation coefficient:

This showed an excellent correlation between the new developed method and the reference gold standard HPLC analysis. Therefore the proposed DPV-based method coupled to MISPE was shown to be very suitable for the quantitative analysis of PBZ in equine plasma.

Linearity, LOQ/LOD and Accuracy and Precision

The study performed a linearity test calibration curve with PBZ using standard solutions and the measurements were repeated nine times. The study’s criteria for r2 and g were r2 ≥ 0.99 and g≤10%.

Precision is the amount of scatter in results taken from multiple analysis. Accuracy is the Closeness of measured value to true answer.

The within-day samples were assessed using blank plasma samples spiked with PBZ at 0.05 g/ml, 0.5 g/ml and 10 g/. These were extracted using the MISPE-procedure and analyse took place on the same day.

Between-day samples were assessed using the same samples as the within-day tests. The acceptance criteria for accuracy were −20% to +10% of the theoretical concentration.

The study found that the accuracy of the estimated PBZ concentration was more than 94% at three concentrations used as quality control samples.

The comparison to all the known ‘Gold standard’ methods showed this method to be more sensitive and less expensive, both in terms of analysis time and instrumentation costs.