Persistence of DNA: An examination of degradation of blood sourced DNA on knives, by household substances and the forensic implications

A review of relevant and current peer-reviewed literature

Often after an assault with a weapon, i.e. a stabbing or murder, attempts are made to clean and or dispose of the weapon used. The most readily available weapon is a knife, whether the attack is pre-planned or ‘spur of the moment’, knifes are easily available to buy and are also, part and parcel with every household i.e. kitchen. 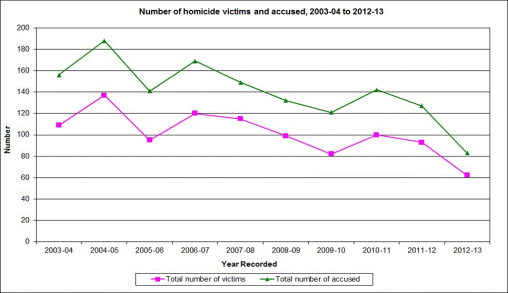 Forensic presumptive tests can be used at scenes of crimes for various reasons. They can test to see what a substance might be i.e. drugs, blood. There are various reagents available for use in the presumptive testing for the presence of blood at a crime scene, using varied types of reactions.

Phenolphthalein is the main reagent used in the Kastle-Meyer presumptive test for blood. This test is mainly used one unidentifiable stains, therefore this is used upon visible (patent) samples.

The Kastle-Meyer test is a catalytic method, the phenolphthalein will cause an alkaline solution to turn pink after its oxidation by peroxide when blood is present. According to (Johnston et al., 2008), it will detect blood as dilute as 1 part in 10,000.

There are several false positives for the test and these include according to (Virkler and Lednev, 2009) chemical oxidants and fruit and may also include vegetable peroxidases.

Leucomalachite Green or LMG is another widely used catalytic method to presumptive test for blood. It works by the same principle as Kastle-Meyer with the exception of the stain being gently rubbed with filter paper containing the reagent. After no colour has developed hydrogen peroxide is again added as in Kastle-Meyer and a green colour change in this case is in indicative of the presence of Blood. Johnston et al, also state that Leucomalachite green has a sensitivity similar to that of Phenolphthalein, 1 part in 10,000.

Luminol is a forensic presumptive test for latent blood, i.e. blood which cannot be seen. Crime scenes are often cleaned afterwards by the perpetrator in an attempt to hide any evidence of what had occurred. Luminol allows crime scene investigators to see the full picture at a cleaned crime scene.

Webb et al, 2006, State that Luminol is known as the most sensitive of the presumptive tests currently used at crime scenes.

According to (Patel and Hopwood, 2013) There are two more commonly used Luminol formulations. These formulations were developed by Grodsky in 1951, Luminol I, and Weber in 1961, Luminol II.

Commercial luminol products have become more readily available in the recent years and brands such as BlueStar and BlueStar Magnum and Lumiscene, have come onto the market. These products offer the advantage of being easier to prepare than the more traditional formulations.

However according to (Quinones et al., 2007) The Grodsky formulation of Luminol I can have a detrimental effect on the ability to subsequently perform DNA analysis in comparison to the Weber and BlueStar alternatives.

Luminol’s sensitivity may be an advantage at finding the smallest drop of blood, but it is also its downfall.

DNA is without doubt the greatest scientific discovery of forensic use to date.

STRs or Short tandem repeats, are genetic markers which were first discovered in the early 1990’s. (Edwards et al., 1992) Showed that STRs were an effective tool when used for human identity testing. They showed that there were enough variation through alleles for individuals to be positively identified.

New alleles are still being discovered with variations in size which may not be found in commercially available ladders.

(Gill et al., 2000) explain that LCN or low copy number, in a PCR amplification technique which can be applied to DNA samples with as little as <100pg total genomic DNA. It works by increasing the number or amplification cycles the sample undergoes during PCR.

Kloosterman & Kersbergen, 2003, explain that ‘28 + 6’ improved efficacy of DNA sample genotyping. Their 34 cycle PCR technique instead of the normal 28 PCR cycles offered an alternative approach to genotyping forensic DNA samples, which are perhaps low quality or degraded.

Low copy number analysis of DNA is not without problems. The most common issues with LCN are allelic drop-out, heterozygote imbalance, stutter peaks/products and unexpected allelic peaks.

(Cotton et al., 2000) Validated the most recent 11 loci STR DNA analysis method for use in standard forensic casework. The technique was also validated for use in casework involving > 1ng of DNA, i.e. LCN.

If you have committed a crime, disposing or destroying of the evidence is more than likely your next step. More often than not this is problem faced by forensic scientists, that a deliberate attempt to remove any of the biological material i.e. evidence, blood, using a variety of cleaning materials. Most people store their cleaning supplies in their kitchen or bathroom, so general household cleaners are to be examined.

Every household will contain basic cleaning materials such as bleaches, detergents, disinfectants and perhaps multi-cleaners. Cleaning materials not only have the ability to potentially cause contamination to of any of the surviving evidence but also to degrade any DNA which may still be present on the evidence. Degradation of the DNA will make it difficult to produce and gain a profile which could be used to link the weapon to the crime.

Bleaches can cause many problems at crime scenes, thanks to the American television show Crime Scene Investigation (CSI Las Vegas) most people will know that bleach renders the forensic presumptive blood tests pretty much useless. According to (Harris et al., 2006), Out of all the cleaning products on the market bleach also has the most harmful effect on the quality of DNA available to obtain a profile. They also state that bleach seemed to cause continued degradation of the DNA over time. Common brands of household bleaches include Domestos, Harpic, Mr Muscle, Cif and Supermarket own brands.

This study aims to investigate whether the knife substrate has any effect on the quantity of DNA retained on the weapon after an assault; whether deliberate attempts to remove any biological material, using a variety of household cleaning materials, affect the quality and quantity of DNA that is recoverable and if DNA is recovered from a weapon, whether it was initially detected by presumptive blood tests.

Each cleaning material is applied to the two different knife substrates and the pairs are numbered 3-18, with knife set 1 & 2 being control, the initial DNA for comparison should be swabbed before the control knifes are dried and washed with warm water only. Cleaning materials should be used according to the manufacturers’ guidelines.

PCR will be performed on the extracted samples using

The control samples will be used to examine which was the largest contributing factor in compromising the quality and/or quantity of the sample gained.

Garofano, L., Pizzamiglio, M., Marino, A., Brighenti, A., and Romani, F. (2006) A comparative study of the sensitivity and specifity of luminal and fluorescein on diluted and aged bloodstains and subsequent STRs typing. International Congress Series. Vol.1288(0), pp.657-659.