9cm filter paper was placed in sterile petri dish and 1ml of stock nematode suspension was pipetted onto filter paper. Five live Galleria mellonella (wax moths) were placed onto petri dish and sealed with parafilm (Figure 1). The dish were kept in a dark and observed daily for the insect mortality. Once the G. mellonella were dead they were transferred to white traps. 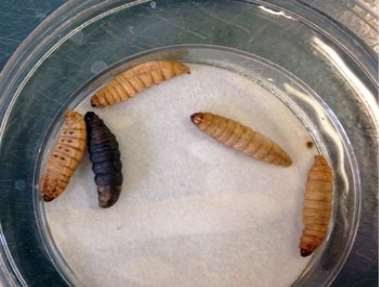 White traps (White, 1927) were prepared which the lid of a small petri dish (35x10mm) was placed on top of the base and placed in a clear tub, this was then covered with filter paper. 30ml of water was added to the plastic container just to allow absorbing through the filter paper. The dead G. mellonella was placed on the moist filter paper and it was covered and placed in dark for 7 to 14 days (Figure 2). The white traps were observed daily for emergence of infective juveniles (IJs) by using stereoscope (Figure 3). Whenever the water around the stage became densely concentrated with nematodes, the water was decanted into a container and replaced with another 30ml of deionised H2O. The nematodes were stored at 4°C in 25ml of distilled water until needed for use. 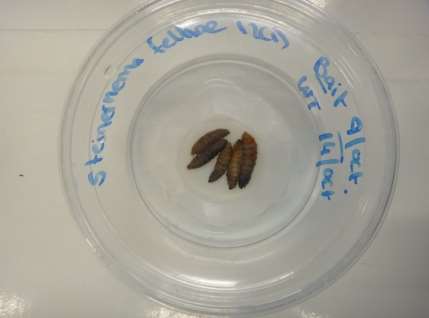 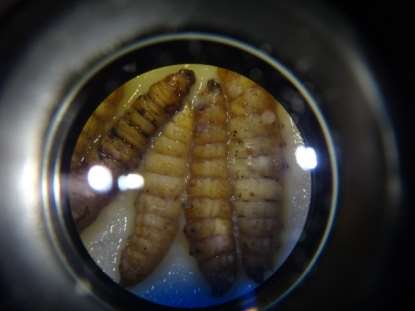 A stock culture of C. elegans was cultures from a previous stock of C. elegans. In a laminar air flow, the plate was divided into equal sections. A sterilized scalpel was used to cut sections from the stock culture to the centre of a fresh NGM plate (Figure 4). The plates were sealed using a strip of parafilm and stored at room temperature or inside incubator at 21°C for 3 days. The petri plates were observed regularly using stereoscope (Figure 5). 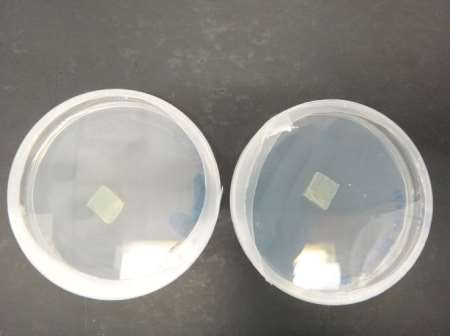 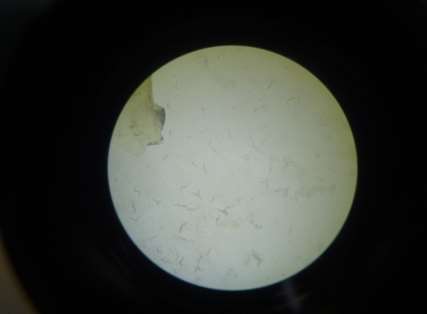 The endophytic bacterial strains used in this study were provided by IT Carlow stock collection and have been labelled with gfp (green fluorescent protein). The Pseudomonas strains used were F113, L321 and L228.

The stock suspension of nematodes was divided into 50ml samples. 100µl of the infective juvenile suspension of each sample was pipetted using micropipette onto a counting tray and tally counter was used to count for nematodes under stereoscope (Figure 6). Once they were counted, the sample was discarded and washed with deionised H2O. This was repeated 10 times and the average number of nematodes was calculated. 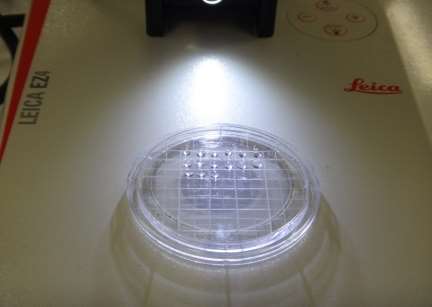 2500g of soil was autoclaved as outlined in section 2.1. The soil was dried in an oven at 55°C for 24 hours. The soil samples were prepared by weighing out 90g into plastic cups (Figure 7) and temporarily covered with tin foil to prevent any contamination. 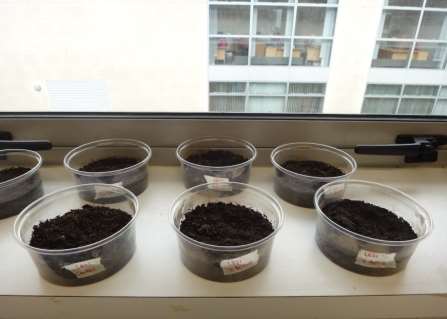 The microbeads stock suspension were prepared by dissolving 10g of Sodium alginate in 500ml of deionised H2O , 10g of Calcium Chloride in 500ml of deionised H2O, and 5g of powdered skimmed milk in 50ml of deionised H2O. All components were autoclaved separately and the skimmed milk was autoclaved only for 10 minutes. The working solution was prepared from the stock solutions as follows; 5ml of skimmed milk, 15ml of sodium alginate and 5ml inoculum. The components of the working solution were poured into a sterile petri dish and mixed using a sterile rod. Parafilm was used to plug the spout of 20ml syringe, the alginate mixture and grass seeds were subsequently added. The parafilm was then removed and a sterile rod was used to ensure the coated seeds dropped out individually, into a beaker containing Calcium Chloride on a magnetic stirring plate (Figure 8). The beads were washed at least three times with sterile distilled water and stored in a sealed petri dished until needed for use. 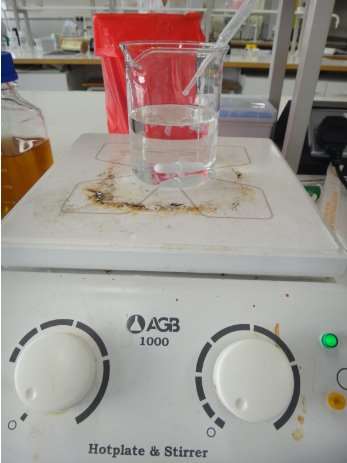 In order to isolate and enumerate bacterial endophytes from microbeads seed coating. Six alginate beads containing individual bacterium were dissolved in 10ml of 0.25M Potassium Phosphate buffer in a test tube and incubated at 30°C for 24 hours. The bead was then shaken on a vortex for 5 minutes to break down the alginate. Using a serial dilution method, 1ml of bead samples containing bacteria was serially diluted in 9ml of sterile ringers from 10-1 to 10-10 (Figure 9); this was carried out onto SGA in triplicate and incubated at 30°C for 24 hours. 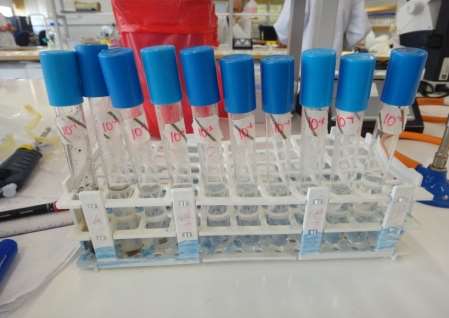 Each plant was removed from pots and excess soil was removed. Three samples were taken from each plant (stem, root, and rhizosphere). The stems and roots were surface sterilised with 1% of sodium hydrochloride and washed twice with sterile water. The stems and roots were cut with sterile scalpel and crushed with a pestle and mortar in 5ml of Ringers solution. 100µl of suspension was added to 900µl of sterile Ringers in 2.5ml microfuge tubes. The serial dilutions were carried out and the resulting dilutions of 30µl were then pipetted onto SGA in triplicate and incubated at 30°C for 24 hours.

The classical approach to bacteria identification involves preliminary microscopic examination of the gram-stained preparation for its categorisation which would later form the basis for the selection of biochemical test to be performed to test their identity. Table (Table 1) and figures (Figure 10(a) to (f)) below shows the characterisation for each strain of endophyte. 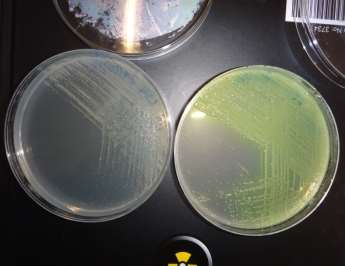 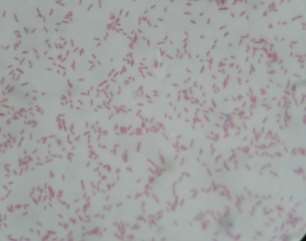 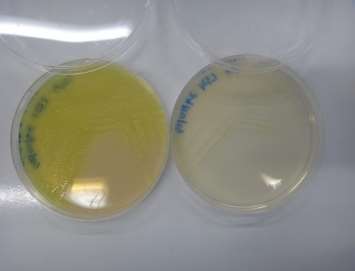 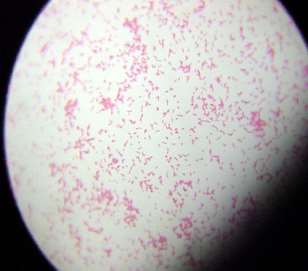 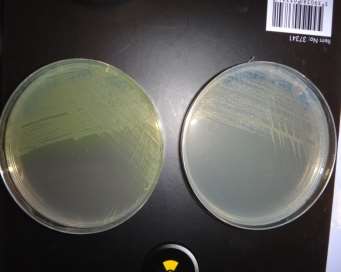 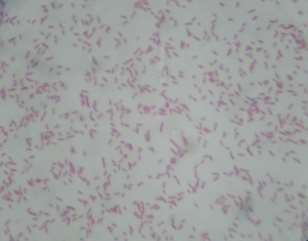 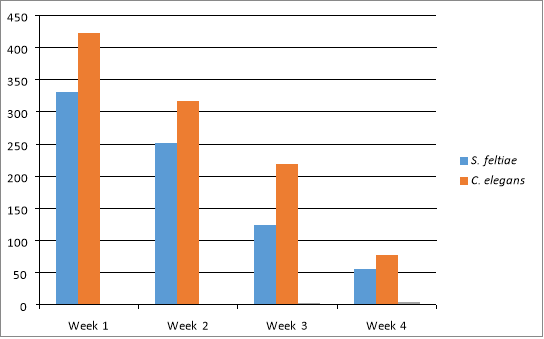 Figure 11- Comparison between No. of IJ/100µl with the time of S. feltiae and C. elegans. 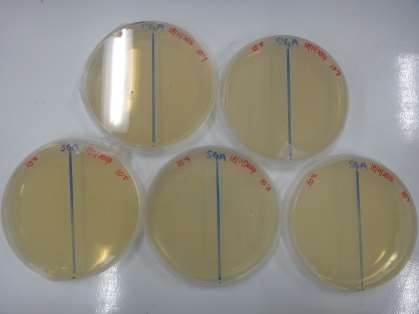 In order to make sure the soil samples free from contamination, the serial dilutions were carried out and the resulting dilutions of 30µl were then pipetted onto SGA in triplicate and incubated at 30°C for 24 hours (Figure 12). The results indicated no growth in the soil samples.

Figure 12 – No growth in the soil samples.

In order to isolate bacterial endophytes from alginate seed coating, the beads were plated onto SGA and incubated at 30°C for 24 hours. The results indicated that fluorescent which present of green colour pigment (Figure 13). 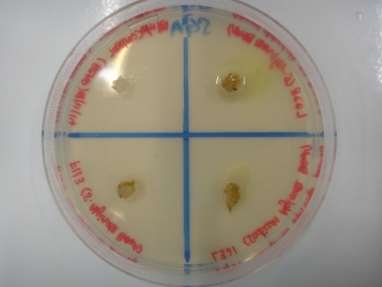 3.5. Colonisation and enumeration of endophytic bacterial within plant tissues

Inoculated perennial ryegrass (Lolium perenne) was allowed to grow for 4 weeks (Figure 14) before sampling took place. Total bacterial population of gfp expressing were determined for each of the tissues examined. Endophytic bacteria are considered to be those isolated from the internal tissues of surface sterilised plants. However, it is difficult to determine whether an organism is truly endophytic or merely a survivor of the surface sterilisation process. To ensure that the sterilisation processes were adequate, the sterilised tissues were pressed against the surface of a sterile SGA plate and samples of the third water rinsing were also plated onto SGA plates (Figure 15). Bacterial counts (Figure 16 and 17) on these plates were always between 10-1 to 10-4 CFUs per ml (Table 3 and 4), which was considered to be a good indication that the surface was successfully sterilised. However, under epifluorescent microscopy, the gfp expressing from inoculated plants. Pseudomonas species strain L321 was detected only in the rhizosphere and the interior root tissues of inoculated plant (Figure 18(a) and (b)). 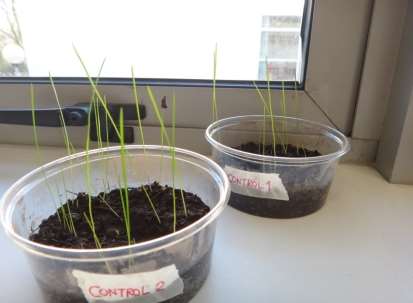 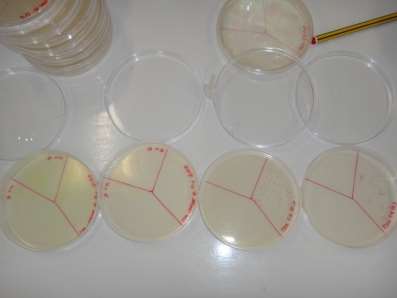 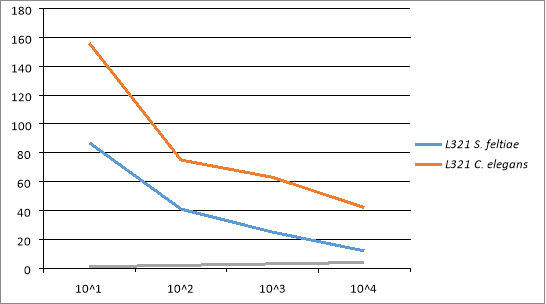 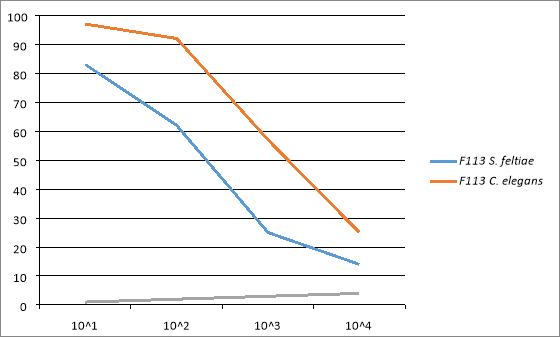 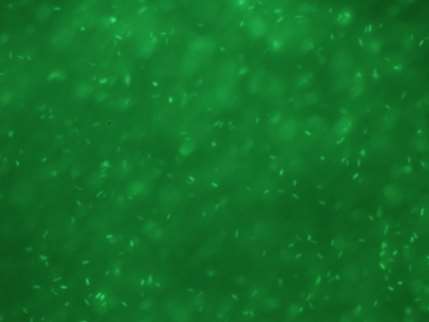 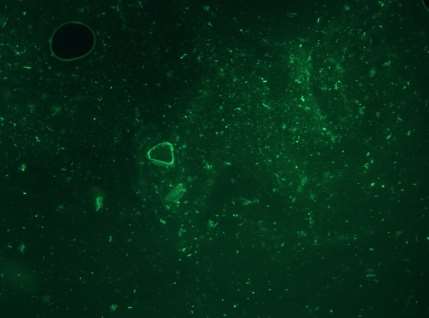 Bacterial colonisation of the internal tissues of plants has been described in almost all plant species examined so far. Although many of these bacteria are phytopathogenic, a considerable number have also been found that colonise the plant without causing disease. Such bacteria are referred to as bacterial endophytes. Colonisation may take place at the local tissue level or throughout the plant, with bacterial colonies and biofilms residing latently in the intercellular spaces and inside the vascular tissues. This project describes the isolation, identification and colonisation efficiency of perennial ryegrass by gfp labelled bacterial endophytes. Furthermore, this study has shown the successful colonisation of perennial ryegrass by three endophytic bacterial strains under controlled conditions. The Pseudomonas strains, L321 demonstrated efficient colonisation resulting in high population numbers within the plant tissues. This experiment shows that the L321 bacteria endophyte worked successfully with the C. elegans to increase the plant colonisation. In this project, L228 was discarded due to the lawns were very poor and did not fluorescence very well so the experiment carried out only with L321 and F113. During the characterisation of bacteria endophytes, the results were obtained which the genus Pseudomonas appeared in Gram negative bacilli motile by polar flagella. In addition, in catalase test shows positive formed the bubbles when comes into contact with Hydrogen Peroxide. On the other hand, the results show that they are oxidase producing which will be oxidised to deep purple colour. Also, when nematodes had been put on plates and timescale had begun it was noticed that some plates start to dry out which may be due to the media drying out so to overcome this this, the plates have to seal with parafilm to prevent from dry out. Furthermore, other notice when the plates rinsed with water, I noticed crystals formed in the media and this may be due to the temperature problem. Generally in the experiment there is no physical quantity can be measured with perfect certainty; there are always errors in any measurement. For example, the systematic errors are due to poorly calibrated instrument; observational for example, errors in judgment of an observer when reading the scale of a measuring device to the smallest division.

In conclusion, this study has shown the successful colonisation of perennial ryegrass by three endophytic bacterial strains under controlled conditions. The Pseudomonas strains, L321 demonstrated efficient colonisation resulting in high population numbers within the plant tissues. Hence, none of the introduced strains showed any signs of pathogenicity towards their host plant and others tested. Many studies have shown that the colonisation levels in field trials are less successful than those in laboratory trials. This is probably due to increased microbial competition and less favourable environmental conditions. Therefore, additional long-term field trials need to be carried out in order to gain a better understanding of the colonisation pattern and population dynamics of endophytic bacteria in the perennial ryegrass. If time permitted future work would include, the carrying out of plant biomass which is a time consuming method that involves drying of cells and to perform by weighing the dry and fresh weight of each plant.