Changes to Bone Density Throughout the Lifespan

Bone age is defines as maturity of children’s bone. It is the average age at which the child bones matures, after the birth in the long bones only metaphyses is there (eg: radius and ulna, Humerus, tibia, femur, fibula, phalanges). In long bones initially there is elongation of epiphysis.

As the age progress the calcification of epiphyses occurs and it is evident on the x-ray. During puberty the bone development progress due to various hormones.

The adult height is achieved after the puberty and the shape of adult bones appears during this period. The cartilaginous part of epiphyses become thinner and these areas become obliterated, during this time epiphyses are closed and no further growth of bones occurs.

X-ray of wrist is taken because it depicts multiple bones and it can be compared with standard atlas of bones by using Greulich and Pyle method. The bones which occurs common changes as the age progress from infant age is seen maximum in pelvis and shoulder, the least changes are seen in wrist of infants. During infancy if the assessment of bone is required the wrist or hand x-ray can be done.

The height possibility can be calculated with the help of height of the child and bone age. Various graphs and statistics are prepared to depict the % if height growth remaining as per the bone age. Various tables for girls and boys are available (bayley pinneau tables, Greulich pyle atlas).

Measurement of bone age is used for reliability in

Bone age evaluation is usually done by radiological examination of the skeletal development of the left-hand, and then it is compared with the chronological age. Any abnormality in between these two values indicates abnormalities. This examination is used due 1) simplicity, 2) a minimum radiation exposure; 3) ossification centres are easily available. There is no standard clinical procedure in bone age assessment, even if the most used methods are: 1) the Greulich and Pyle (G&P) method and 2) the Tanner and Whitehouse (TW2 or TW3) methods. Both methods rely on X-Ray images taken from the left hand, but both methods have differences. The Greulich and Pyle method is the most often used approach (by 76% of radiologists), because it is faster and easier to use with respect to the TW2 or TW3 methods, since it involves only the comparison of the whole hand with a reference atlas.

TW3 method is a commonly accepted procedure in which the guidelines to analyze each bone are de-scribed using words (natural language descriptions), sometimes in a vague way. In addition, one particular bone may show features belonging to different stages or a particular bone shape could be classifiable into two possible predefined labels of the same feature. 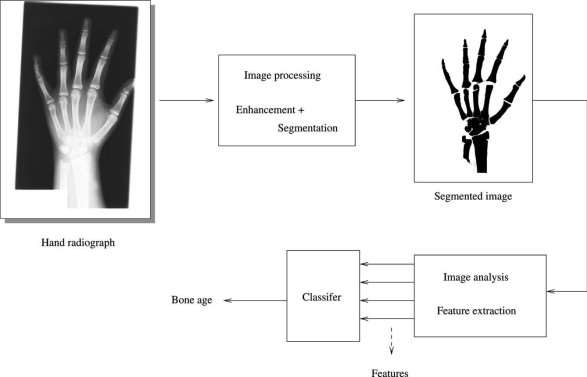 TW3 methodology for bone age assessment consists of a set of rules, expressed in natural language, to describe the prototypical characteristics of the bones of a hand radiograph as they evolve in time. Natural solution is to use the method itself, i.e., to build one classifier for each bone, with 9 outputs (the possible classification stages for each bone—A,B,. . .,I—), except for the ulna, which only has 8 stages. In TW3 method there are two possible analytic schemes, 1) RUS, uses 13 bones (the phalanges, radius, and ulna). The other one uses 20 bones (the 13 bones previously defined and the 7 bones of the carpal region). Maturity stage for each bone in TW3 is calculated from linguistic statements. Stage D. The maximum diameter is half or more the width of the metaphysis. The epiphysis has broadened chiefly at its lateral side, so that this portion is thicker and more rounded the medial portion more tapering. The center third of the proximal surface is flat and slightly thickened and the gap between it and the radial metaphysis has narrowed to about a millimeter. Stage G. The dorsal surface now has distinct scaphoid & lunate articular edges. The medial border of the epiphysis has developed pal-mar and dorsal surfaces for articulation with the ulnar epiphysis; either the palmar or the dorsal surface may be the one that projects medially, depending on the position of the wrist.

Shape of epiphysis I. Oval (stage C) or sharp (stages D–I). Diameters. Ratio between diameters of metaphysis and epiphysis.

Shape II. A ‘‘sharp’’ epiphysis can have a regular outline (stages D and E), can be adapted to the metaphysis shape (stage F), or can have the articulations form (stages G, H, and I).Surfaces. Representation of inner surfaces. They can be absent (stages B, C, and D) or present as a white line (stage E), two white lines (stage F) or a c-shaped surface (stages G, H, and I).

The feature values for each stage are shown in the table:

However, these features are not independent. As a matter of fact, some of the features are self-excluding: Shape II only takes on values when Shape I is sharp and Separation is only defined for a present epiphysis. Consequently, these features can be merged, a fact which contributes to simplify the classifier. After the fusion process, the resulting feature set is:

The new features values for each stage are now: