This practical is split into three main parts, each part allows us to develop certain techniques. The first part of the practical is focused on the techniques needed to successfully carry out cell cultures. The second part is using an analytical technique known as ELISA this is used to measure the amount of proteins secreted by the cells that were cultured in part one. Lastly, part three focuses on western blotting, this is a technique used to measure proteins too but it differs from ELISA in that it measures proteins that are present inside the cell. The fundamental objective of this practical is to look at how Bacterial lipopolysaccharide (LPS) alters the growth and the expression of the smooth muscle cell α-actin (SMA) in vascular smooth muscle cells (vSMC) while also detecting and quantifying cell signalling molecules (JNK’s) and cytokine secretion (TNF-α) in vascular cells.

The aim of this part of the practical is to subculture the bovine aortic vascular smooth muscle cells and to count the cells and check for viability by counting the cells in suspension on a haemocytometer using a microscope. The cells are also treated with a bacterial antigen (LPS) to look at its effect on viability, differentiation state and the activation of intracellular signalling and secretion of proteins. Immunocytochemistry is also carried out in this part of the practical.

Trypsin is used to remove the cells from the bottom of the flask. When the cells have dissociated, medium which contains a trypsin inhibitor is added. The medium stops excessive trypsin action from damaging the cells. The cell suspension is first diluted using trypthan blue to allow viable cells which remain white to be distinguished from non- viable cells which are blue. This method allows us to get a total cell count of cells/mL and the percentage of viable cells.

3 different 6 well plates were then set up using different densities of seed cells.

Immunocytochemistry is carried out on the plate with a seeding density of 5×103cells/ml. This technique is used to determine if a particular protein or antigen is present. An unlabelled primary antibody is used to bind to the antigen desired antigen. The presence of contractile protein α-actin can determine the differentiation state of vSMC. Immunocytochemistry is used as a qualitative method of determining the presence of a protein, it is not quantitative.

Table 1: Cell growth for each group 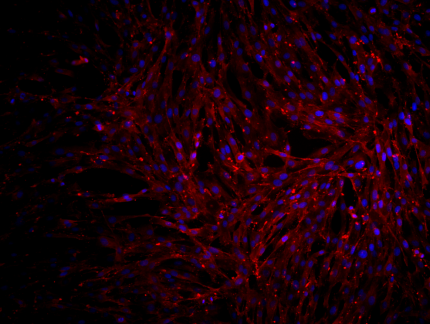 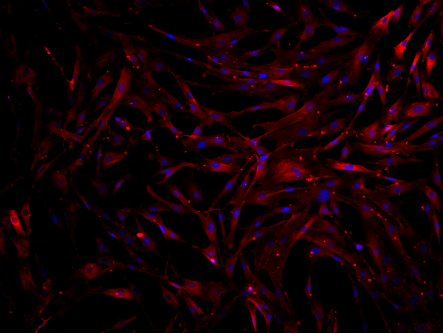 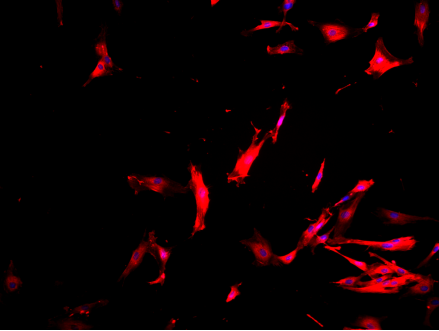 The first part of this section was to carry out a cell count and determine the viability of the suspension. Our sample had 7.45×105 cells/ml and it contained more than 98% viable cells. This meant it was a healthy cell suspension and it was suitable to run tests on for the practical. A seeding density of 1×105 cells/ml seeding density was used to assess the effect of LPS on growth and viability of the cells. This density was used to give a clear picture of the cells to make counting easier. The results of our experiment correlated with the majority of the class. However there were some unexpected results in some of the groups but this could be down to plates being labelled incorrectly or mistakes while counting when using the haemocytometer. Immunocytochemistry is used to allow us to analyse the results visually. We found that as the amount of LPS increased the number of cells decreased, this is illustrated in figures 1, 2 and 3. LPS is an endotoxin and it inhibits the growth of α-actin. LPS also damages the structure of α-actin, high levels of LPS stop the correct formation of the filaments and so affects the function of the cell which is to facilitate cell contraction and migration. This result was expected as LPS is a major mediator to septic shock and is known to directly affect vascular smooth muscle cells.

What could you do to improve this experiment?

To improve this experiment I would use a wider range of concentrations for LPS. This would give a better understanding of its affects. Repeating the experiment several times and getting an average of your results would also help.

The aim of this section of the practical is to use Enzyme-Linked Immunosorbent Assay (ELISA) to detect production of the cytokine TNFα from the cells activated with LPS. Detection is based on a colour change. Firstly a standard curve must be generated so that absorbance values can be converted into concentrations of TNF-α. Once the curve is completed we can determine the unknown concentrations of TNF-α in our samples.

Figure 4. Plot of standard curve of absorbance versus concentration. 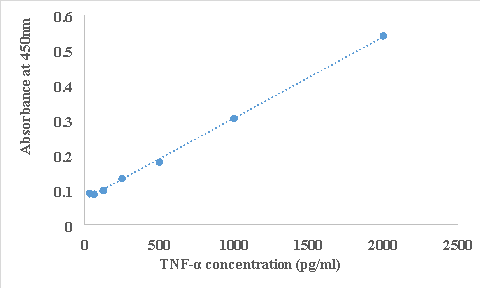 What could you do to gain more information from this experiment?

To gain more information from this experiment you could test for other cytokines which are also activated by LPS, correlating these results would make your data more meaningful.

The aim of this section of the practical is to prepare cell lysates from the vascular smooth muscle cells which were activated by LPS previously. SDS PAGE and western blotting will then be used to detect the activation of the intracellular protein JNK. Western analysis quantifies the amount of protein present in the cell. To do this cell lysis must be carried out. In this practical we used a method which generates whole cell lysates. To do this lysis buffer is added to the cells followed by sonication. 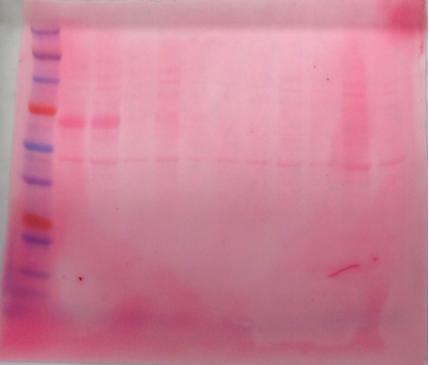 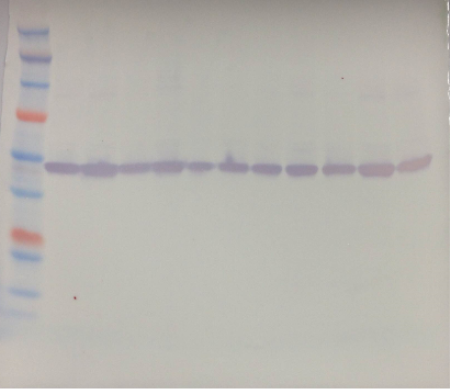 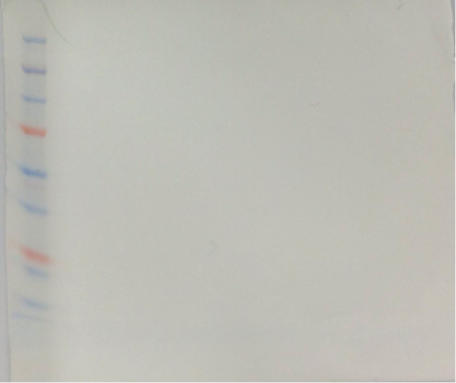 To see if our transfer was a success before probing, the blot was stained with Ponceau S stain. The proteins can be seen as red bands with this stain. The result of this stain can be seen in figure 5. red bands are present which indicates our transfer was a success and that there are proteins present. The western blot analysis showed that α-actin was present in all the samples as a strong band around 42kDa was observed which is expected for α-actin. The results for pJNK did not work out as it was washed incorrectly, because of this no bands were observed, however bands would be expected in the samples containing LPS.

Why did you run the sample on the gel before blotting?

The sample was run on gel first as proteins are separated by molecular weight. This allows us to distinguish α-actin from other proteins. It is then moved to the nitrocellulose paper so that analytical procedures such as detection with antibodies can be carried out

Why measure the phosphorylated form of JNK?

The phosphorylated form of JNK is a signal a cell sends out when it is stressed. Therefore pJNK should be present in the samples with LPS. If it is present then it confirms the fact that the cell is stressed as a result of the presence of the endotoxin.