Causes and Impact of Health Inequalities

In today’s world, the advancements in medical technology and its expansion have improved the overall health of the population. However, inequalities persist within health care and not all people have equal access to it. Why do these disparities still exist in the present day? Understanding why these inequalities exist despite modern advancements has a significant importance in reducing health care inequalities.

Understanding health care inequalities and its challenges are the aim of this assignment. It seeks to explain and understand the mechanisms underlying the associations that can be found between the socio-economic statuses of population groups and their quality of health. It also explores life course pathways which mould and influence a person’s chances of having a healthy life along with advantages and disadvantages that can affect health from an early age into adulthood. In addition, other factors such as gender, mental illness and disability and ethnicity will also be discussed since they also have a major contribution to inequalities in health. The assignment will focus on research led in the United Kingdom (UK).

The United Kingdom’s long tradition of research on health inequalities

The UK is a high-income society, where greater prosperity and better overall health have been successfully attained without narrowing health inequalities, it can therefore be taken as an example for other societies that manifest similar trends in inequalities (Graham, 2009).

“Health inequalities are differences between people or groups due to social, geographical, biological or other factors. These differences have a huge impact, because they result in people who are worst off experiencing poorer health and shorter lives” (NICE, 2012).

During the 19th century, inequality in health was mostly due to factors such as overcrowding, insufficient availability to local treatment facilities and poor sanitation (Morning 2015). Nowadays, in our industrialized society, these disadvantages have essentially disappeared. Modern hospitals and treatment centres are now commonly accessible across the UK. But not everyone can afford treatment.

A study led in 2004 has shown that wealth is correlated with longevity, which demonstrates a strong link between the socio-economic status and mortality. For example, Figure 1 exhibits a pattern of health across income groups in England in 2004. As seen below, the proportion of men and women who deem their health as “not good” increases from around 15 percent in the richest fifth of English households to around 40 percent in the poorest fifth of households. This significant rise is not only manifested in the majority white population but also in other ethnicities in the UK (Graham, 2009). 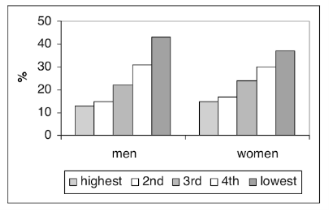 Figure 1: “Proportion of women and men aged 16 and over assessing their health as “not good” by income quintile based on equivalized household income, England 2003.” (Graham, 2009)

This can be explained by considering the advantages that people in the higher socio-economic groups have. These advantages can lead to more knowledge about their health and the care available through improved education, or better continuity of care without issues of complying with treatment regiments such as expensive medication. For example, a man with higher income and education levels will have improved health insurance, increased information about the availability of treatments and will more frequently visit the doctor. This can translate into receiving more screenings such as screenings for colorectal cancer and diabetes.

Differences between social classes and how they affect health

These models differentiate the characteristics affecting health that can be observed in different social classes over the whole period of their lives.

For example, by describing the differences in behaviour that distinct social classes have, i.e. the behavioural model. Such as their dietary choices between healthy and unhealthy food, their prevalence to being in contact with drugs, alcohol and tobacco or the inclination to pursuing active leisure time such as hobbies in addition to their approach to healthy life choices such as immunisation, contraception and antenatal services (Steinbach 2009; Bartley, 2004; DHHS, 1980).

Another model is the materialist model which describes the differences between social classes to the exposure to health hazards. This encompasses hazards such as air pollution, mold, cold, infestations and respiratory hazards that can arise from bad housing for example. The Black report (DHHS,1980) claims that this model is the most decisive factor leading to health inequalities. But many experts outline that since, in the UK, somewhat disadvantaged people receive various kinds of state aids, therefore it can be argued that housing and other materialistic issues are insufficient to account for major inequalities in health outcomes (Steinbach, 2009; Barley, 2004, DHHS, 1980).

The psycho-social model on the other hand describes the principle that what people feel can determine changes in the physiology of the body. For example, a stressful social environment produces an emotional response which alters the state of the body through biological changes and can lead to serious conditions such as heart diseases (O’Donnell, 2008). Areas affected can be the social interaction that an individual has every day, the work environment and the balance between home and work paired with their efforts and rewards. It has been shown that people with better relationships with their family and friends and who engage in social activities have better prospects to a healthier lifestyle than those who are rather isolated (Campbell, 2010).

The last model focuses on patterns of social, psychological and biological advantages and disadvantages that can occur during the lifetime of a person. Factors that can influence a person’s life can arise as early as in-utero and in early childhood. These disadvantages can ultimately accumulate and worsen through childhood and adulthood (Steinbach, 2009; Bartley, 2004). For example, individuals who have experienced differences in autonomy or, on the other hand, shame and doubt in childhood will react differently throughout their adult life (Graham, 2009).

These models are represented by landmark studies in social class inequalities in health in the UK such as the Black Report (DHHS, 1980), the Whitehall study of British civil servants (spans over 10 years starting in 1967) and the Acheson report (Acheson, 1988).

Many studies and researches have proven that, in industrialized countries such as the UK, women live longer than men but present more prevalence to ill health (Scambler, 2008). Although men have a greater chance of mortality due to injury and suicide in earlier stages of adulthood coupled with common single causes of death in adulthood such as cardiovascular diseases and cancers, more women than men go through stages of disabilities, notably in older ages. Mental disabilities have mostly been commonly correlated to anxiety and depressive disorders (Steinbach, 2009; Bartley, 2004; Acheson, 1998).

The World Health Organisation (WHO) in 2008 suggested that “gender differences in health are a result of both biological factors and social factors such as employment, risk taking behaviour, smoking and alcohol” (Campbell, 2010).

Unfortunately, the information on death certificates in the UK do not display ethnicity, and mortality data uses country of birth as a defining factor, therefore ethnical minorities born in the UK cannot be determined. But regular documented studies on ethnical inequalities in mortality (Kelly, 2008) have explained that factors such as, migration processes, defined socio-economic disadvantages and genetic and biological differences between ethnic populations account for differences in mortality.

Inequalities in the accessibility to health care

The inverse care law, first described by Julian Tudor Hart in 1971, states: “The availability of good medical care tends to vary inversely with the need for it in the population served” (Hart, 1971).

Equality of access to health care can be achieved by communities by meeting certain requirements. Factors such as the distance travelled, the transport facilities and communication used, the hospital waiting times, the patient information and knowledge about available treatment and its effectiveness and the costs of all these are considered to contribute to a health care system which is equal to all (Steinbach, 2009; Cookson, 2016).

Availability is a determining factor of inequalities in accessibility in health care. Some health care services have been shown to treat population groups differently, denying services to some people and preferring others for a certain treatment. For example, clinicians might have a bias in treating different patients based on individual characteristics even though they have identical needs. The equality in the costs of health care can also be disrupted by imposing costs which differ between people. Or even the information given to different populations can impact the patient’s outcome. For example, health care organisations who neglect or fail to ensure that everyone is equally conscious to the services available (Goddard and Smith, 2001).

The NHS regularly comes top of international league tables of fairness in health care but it is not perfectly fair. There are inequalities in the volume, quality and outcomes of NHS care received by rich and poor people. These inequalities could get worse as financial austerities start to bite more severely into NHS budgets and may contribute to wider health inequalities in society. These inequalities raise serious concerns about social justice and unfulfilled potential for disadvantaged people to live longer and healthier lives. A research project lead by Richard Cookson in 2012 focused on monitoring fairness of the NHS to make sure inequalities don’t get worse and if possible get better. In 2012, the NHS still didn’t monitor how inequalities were changing. And NHS decision makers knew that inequalities existed, but they had no way of telling if inequalities were getting better or worse or what influence their decisions were having on inequalities. By monitoring the fairness of the NHS, the results will make sure that everyone, rich or poor, can receive the care they need to live a long and healthy life (Cookson, 2016).

Recently, research projects have provided methods of comparing the performance of local NHS areas in tackling inequalities in health care. Alongside similar indicators for wider determinants of health, such as the regularly updated marmot indicators (UCL, 2015). Which review the key areas that need to be improved to make a significant impact on health care inequalities such as strengthening the role and impact of ill health prevention. The methods will assess how well the NHS is tackling inequalities across a broad range of issues (Buck, 2016). 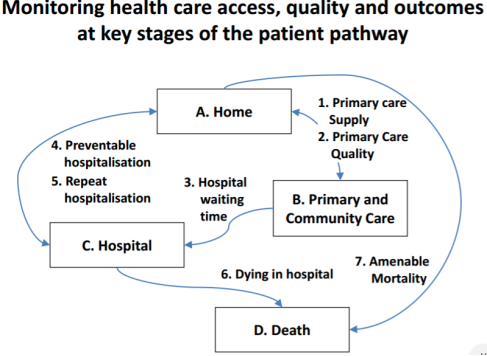 For example, Figure 3 shows that GP supply increased in all social groups, and the largest increases were in the most deprived areas. As seen below, the pro-rich inequality gradient was eliminated by 2011/2012 (Asaira, 2016).

Health care inequalities most commonly arise from socio-economic conditions and are shaped by political, social and economic forces that can create or destroy a person’s health and wellbeing. These problems are now seen as health problems that must be addressed to ensure everyone has an equal chance of a healthy life. Factors such as the costs of healthcare, social class, gender, ethnicity and accessibility to health care all contribute to the quality of life. Recently, projects have been undergone to help improve healthcare in the UK, for example, by monitoring the fairness of its services. In my opinion, the UK is one of the leading health care services in the world despite existing inequalities, but can be improved by further understanding and improving these inequalities, who have been only recently assessed.

-Campbell F (2010). The social determinants of health and the role of local government. England: Investor in People. 5-68.

-Cookson R (2016), Health Equity Indicators for the NHS, presented at Maximising the impact of the NHS in tackling health inequalities, London, 2016.

-Scambler A (2008). Women and Health in Scambler G Sociology as applied to medicine. Elsevier Limited.

– Steinbach R. (2009). Inequalities in the distribution of health and health care and its access, including inequalities relating to social class, gender, culture and ethnicity, and their causes. Available: http://www.healthknowledge.org.uk/public-health-textbook/medical-sociology-policy-economics/4c-equality-equity-policy/inequalities-distribution. Last accessed 1st Feb 2017.