1. Osteology of the upper limb with emphasis on the elbow and wrist

2. The neurovascular supply to the upper limb

6. Mode of action of Indomethacin

1. Osteology of the upper limb with emphasis on the elbow and wrist 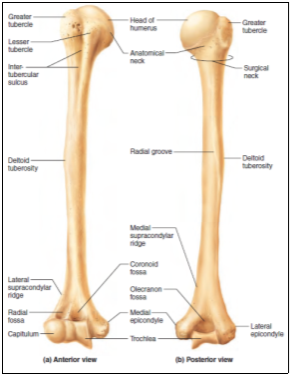 For Anil’s case we will focus several prominent features on the distal region of the humerus which forms part of the elbow. There are two projections on either side of the distal end of the humerus which are the medial and lateral epicondyle. The medial epicondyle protects the ulnar nerve which passes just posteriorly and also serves as the attachment site for the forearm superficial flexor muscles. The lateral epicondyle conversely is the attachment site for the forearm extensor muscles. Anteriorly in between these two epicondyles are two articular surfaces: the round surfaced lateral capitulum which articulates with the radius and the spool shaped medial trochlea which articulates with the ulna. Also anteriorly, the radial fossa directly above the capitulum accommodates the head of the radius during flexion of the elbow whereas the coronoid fossa directly above the trochlea accommodates the coronoid process of the ulna during flexion of the elbow. Both the radial and coronoid fossa limit flexion of the elbow. Posteriorly, the olecranon fossa accommodates the olecranon process of the ulna during extension of the elbow. The olecranon fossa prevents hyperextension of the elbow.

The forearm is made up of two bones: ulna and radius. Proximally both of these bones articulate with the humerus whereas distally only the radius directly articulates with the carpals of the wrist thus connecting the arm to the wrist. The ulna and radius are shown in figure 2 below. 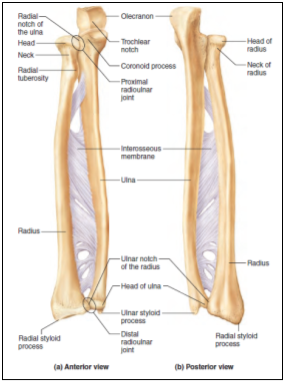 The radius is the lateral and shorter of the two bones. The head of the radius is a flat button shaped process that articulates with the capitulum of the humerus. The neck of the radius is a constriction just distal to the head which Anil has fractured. Due to the fact that no neurovascular problems were found, it is safe to conclude that the deep branch of the radial nerve was not damaged in this case. The radial tuberosity is distal to the neck on the anterior site which is the attachment point for the tendon of biceps. 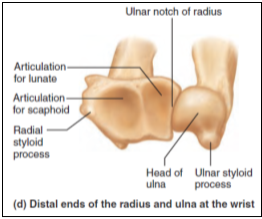 2 The neurovascular supply of the upper limb

The upper limb is supplied by the subclavian artery which branches off from the brachiocephalic trunk on the right and aortic arch on the left. The subclavian artery extends from its origin to the lateral border of the first rib. It then changes its name to the axillary artery which extends to the lateral border of teres major after which it becomes the brachial artery. The brachial artery extends to the cubital fossa of the elbow where it bifurcates into the radial and ulnar artery which run down the lateral and medial side of the forearm respectively. These two arteries anastomose in the palm of the hand forming the superficial (mainly supplied by ulnar artery) and deep (mainly supplied by radial artery) palmar arches. The fingers are supplied by the digital arteries branching from the palmar arches. The arterial supply is illustrated in figure 4 below. 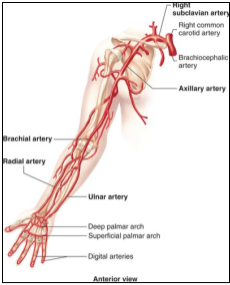 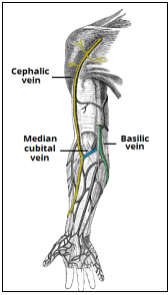 Secondly, there are deep veins which usually accompanies the arteries in pairs and have the same name as the arteries. Perforating veins connect the superficial and deep veins to allow blood to always find a way back to the heart. All the veins eventually drains into the axillary vein, then to the subclavian vein, then brachiocephalic vein and finally into the heart via superior vena cava.

The brachial plexus serves as the nerve supply for the upper limb arising from spinal nerve roots from C5, 6, 7, 8 and T1. There are 5 terminal branches of the brachial plexus in the arm. Table 1 below shows the five terminal nerves with their corresponding roots, motor supply, sensory supply and clinical test.

The muscles that move the elbow are shown in table 2 below:

Movements and ranges for the elbow and wrist are shown in table 3 below:

Table 3 Movements and ranges for elbow and wrist (6)

Symptoms include swelling in the front of the elbow, severe pain at the elbow and a bulge in the upper arm because of the shortened biceps brachii muscle. Since Anil shows no biceps tendon reflex upon assessment, this is likely to be a complete rupture of the tendon.

In this case, Anil is diagnosed to have ruptured his distal biceps tendon which attaches to the radial tuberosity. Distal biceps tendon rupture tends to be caused by a single traumatic event involving flexion of the elbow at a right angle against resistance. For Anil, the snapping of the rope caused his elbow to straighten suddenly. His biceps contracted extra hard to prevent this from happening but the extreme tension in his biceps and tendon led to the rupture of the distal biceps tendon.

Since Anil is still relatively young at 38 years old and still needs full use of his upper limb, the surgical treatment option is most preferred. Sometimes the tendon is attached by stitching through holes made in the bone. However the surgery for Anil was done by attaching the tendon to the bone using a small metal plate and screws into the radius to secure the plate usually called the endobutton technique (7, 8) which has a very good prognosis of regaining full mobility in the elbow.

Complications after the surgery include nerve damage and heterotopic ossification. After eight weeks Anil returned with stiffness, difficulty in turning his hand over and wrist pain which the doctor diagnosed as heterotopic ossification after palpation of a firm mass along the biceps tendon. Direct intervention was not taken as the biceps tendon needed time to fully heal.

Heterotopic ossification is the growth of bone in abnormal places such as soft tissue. Heterotopic ossification is a notable complication of distal biceps tendon repair. The current proposed pathogenesis of how heterotopic ossification arises is the transformation of pluripotential mesenchymal cells which are recruited to the fracture healing site into osteoblasts that results in ectopic bone formation. (9) Bone, tendons and ligaments which are all connective tissue all share the same mesenchymal stem cell origin (shown in figure 6) and thus mesenchymal stem cells recruited to promote tendon repair can differentiate into osteoblasts. Osteoblasts can also be pulled out of the bone when the tendon ruptures and therefore can lead to bone deposition. Hence great attention has been given to cleaning and irrigating the surgical zone. (10) 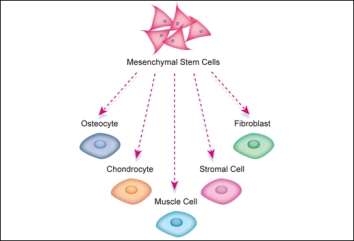 Radiation therapy has been an established supplement in treatment of heterotopic ossification. (10, 12, 13) The mechanism of how radiation therapy works is still unclear but is thought to inhibit pluripotential mesenchymal stem cells from differentiating. (14) However, even though radiation therapy is effective, there has been concerns about malignancy from the radiation. Low doses (<1000 cGy) of radiation that are effective for heterotopic ossification without increasing the risk of radiation-induced sarcoma have been used. (15, 16) Several studies have also demonstrated the effectiveness of a single low dose of radiation. (17, 18) Thus it was decided for Anil to be given a 700cGy radiation dose a few hours post operation.

6 Mode of action of Indomethacin

Non-steroidal anti-inflammatory drugs (NSAID) such as Indomethacin are also commonly used to supplement surgical excision of heterotopic ossifications. (10, 13) Indomethacin non-selectively inhibits cyclooxygenase (COX1 and COX 2) which are involved in the production of prostaglandins from arachidonic acid. During the healing of a fracture, mesenchymal stem cells differentiate into chondrocytes which is independent of COX-2. COX-2 then produces prostaglandins which cause the chondrocytes to hypertrophy. These hypertrophic cells secrete growth factors which cause angiogenesis, osteoclast recruitment, osteogenesis and fracture bridging which leads to bone deposition shown in figure 7 below. However NSAIDs have to be carefully prescribed especially with patients who have reflux diseases as NSAIDs can lead to ulcer formation. (19) 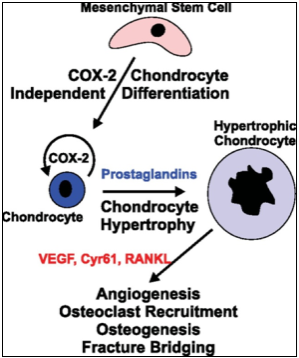 Figure 7 Formation of bone via COX-2 and prostaglandins (20)

In conclusion, more research has to be done into the pathophysiology of heterotopic ossification as well as selective drugs that only inhibit COX-2 so that NSAIDs can be safely prescribed even for patients who have reflux diseases.

6.Wong You Jing J. Movements and ranges for the elbow and wrist2015.

9.H. Hastings II, Grahamn TJ. The classification and treatment of heterotopic ossification about the elbow and forearm. Hand Clinics. 1994;10(3):417-37.