The United Nations recently estimated that the world’s population has exceeded seven billion people. It is projected that approximately 16% of this population rely on fish as a principal source of the protein obtained from animals [1]. However, many wild stocks of fish have begun to collapse due to destructive overfishing and damage caused to aquatic ecosystems by climate change. Aquaculture is the farming of aquatic species under environmentally managed conditions and is increasingly used throughout the world as a major food production method, providing approximately half of the fish consumed globally [3]. Sustainable aquaculture will play an important role in meeting the food requirements of a growing population while reducing the impact commercial fishing plays on overexploited and endangered species. Of critical importance when raising aquatic organisms under densely populated conditions is disease prevention. In an aquaculture setting with large populations of fish in close quarters, bacterial and viral pathogens can spread rapidly partially due to the efficacy of transmission in water [4]. Therefore, an important consideration in moving towards sustainable aquaculture is effective and efficient prophylactic methods for preventing infection. Reduction of labour and material costs is of major concern in aquaculture disease management, therefore manual vaccination methods, such as intramuscular injection, are not considered viable in this regard.

Salmon are a fish species of major commercial aquaculture relevance and as such, disease prevention in these farming scenarios is of substantial economic and environmental concern [5, 6]. One disease of relevance to farmed salmon species is the infectious hematopoietic necrosis virus (IHNV), a.k.a. Chinook salmon disease. It is a rhabdovirus whose genome encodes a glycoprotein, which presents as a viral antigen [7, 8], and is a pathogen that causes deadly disease in many salmonid species of fish. Since its discovery in the 1950s, IHNV has spread throughout North America, as well as to Asian and European countries. It causes necrosis and hemorrhage within infected fish, commonly in the kidney and spleen, and induces high mortality in young fry [9]. It can be particularly devastating in the densely populated aquaculture setting. Given the environmental sustainability and economic importance of commercially farmed salmon globally, it is therefore of importance to develop practical cost-effective methods for vaccinating large populations of fish against diseases such as IHNV. Gene based vaccines have been shown to be able to deliver plasmid-encoded DNA (pDNA) to fish cell cultures in vitro [10]. The protein produced inside the animal cell is treated as a foreign antigen, and can cause a protective immune response against a pathogen such as a bacteria or virus.

The aims of this proposed research program are several fold. The objectives are to develop and test an appropriate bacterial vector for the delivery of a plasmid mediated DNA vaccine in an aquaculture environment. This vector will be assessed using molecular methods for efficacy within a suitable in vitro model system to examine the ability to deliver an immunologically relevant product of interest. This system will then be evaluated for effectiveness against pathogenic challenge within an appropriate in vivo model system. The hypothesis driving this proposal is that an engineered bacterial vector can effectively deliver a plasmid mediated gene vaccine within salmonid, and protect against a lethal challenge of a species and commercially relevant pathogen. Previous studies suggest that this is a worthwhile and meaningful pursuit in the global aquaculture context [11, 12]. Effective DNA vaccines against IHNV have previously been developed, however these types of vaccines have been historically delivered by intramuscular injection [11]. Several alternative methods of DNA vaccine delivery have been explored for including liposomes and ultrasound [13]. Though these methods present issues such as training, equipment costs, and sub-optimal vaccine delivery. An ideal scenario in an aquaculture context would involve a relatively inexpensive delivery vector (e.g. bacteria) carrying a vaccine, which can be easily dosed directly into the environment and induce a protective immunity within the population. 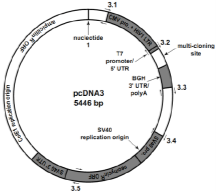 The concept of using attenuated bacteria as DNA delivery vectors has been explored for some time [14, 15]. In prior studies, Escherichia coli have been shown to be capable of successfully acting as DNA delivery vectors to mammalian cells in vitro [12, 16]. For aquaculture settings, employing pathogens of human concern, even if attenuated, have regulatory and health concerns. For this reason delivery vectors such as E. coli are not ideal. In this study, an attenuated version of the salmonid pathogen Yersinia ruckeri, the cause of enteric redmouth disease (ERD) will be utilized. The rationale for using this attenuated vector is that it is a naturally occurring fish pathogen, in addition, it is not of human health concern. Furthermore, there is potential that the vector itself may induce immunity against ERD acting as a bivalent vaccine. Previous reports using attenuated bacteria as a vector for gene delivery indicate that release of pDNA is enhanced by death of the bacteria inside the host cell [17]. One strategy to achieve intracellular rupture of the vector is through the use of cell wall deficient bacteria. In this proposal, a strain Y. ruckeri lacking the ability to synthesize the cell wall component diaminopimelic acid (DAP) will be exploited. In the absence of an exogenous source of DAP, the bacteria cannot synthesize the peptide cross bridges of the peptidoglycan cell wall and will undergo autolysis during subsequent growth. Two engineered plasmids will be utilized for the proposed studies, one vaccine and one control. The vaccine plasmid will have the full glycoprotein from Y. ruckeri cloned in downstream of a cytomegalovirus (CMV) promoter. The control plasmid will have firefly luciferase reporter gene also cloned in downstream of a CMV promoter. To summarize these experimental components; bacterial vector strain α, vaccine β and control γ plasmids:

The proposed model of plasmid mediated vaccine delivery in this system is multi-step:

Transformation of bacterial vector with vaccine and control plasmids

Competent Y. ruckeri strain11.29Δdap will be transformed with either pIHNV-G or pLUC by electroporation or chemical methods. Successful transformants will be screened by growth on appropriate media agar plates supplemented with ampicillin and DAP.

Examination of transfection frequency via flow cytometry and fluorescence microscopy

For tissue culture experiments, Chinook salmon (Oncorhynchus tshawytscha) embryonic cells (CHSE-214), and normal rainbow trout (Oncorhynchus mykiss) gill cells (RTgill-W1) will be employed. These cell lines are relevant to the species and aquaculture context of interest for this research proposal. Both are relatively easy to culture, e.g. not requiring increased [CO2] or temperature. Transformed bacteria (11.29Δdap-pIHNV-G, or 11.29Δdap-pLUC) will be co-incubated with sub-confluent layers of each cell line and transfection frequency / gene delivery with reporter plasmid will be assessed by flow cytometry and fluorescence microscopy.

Invasiveness of 11.29Δdap, 11.29Δdap-pIHNV-G, and 11.29Δdap-pLUC will be quantitatively assessed by gentamicin protection assays. Briefly, each cell line will be co-incubated with the vector (11.29Δdap-pIHNV-G, or 11.29Δdap-pLUC) at a multiplicity of infection of ~100 bacteria per tissue culture cell and incubated for 2h. At 24 and 48h post-incubation, cell monolayers will be fixed and analyzed via fluorescence microscopy for luciferase expression.

Transformed bacterial vector will also used to treat O. mykiss in vivo through dosed aquaculture immersion. Adolescent O. mykiss fry will be maintained at 12°C in appropriately sized aquaria with filtration and aeration and water quality factors (e.g. pH, NH3, Cl) with daily feeding and 5% water changes. In preparation for treatment, fish will be moved to separate isolated 40L aquaria with filtration with feeling and 25% water changes every two days.

The proposed experimental treatment / exposure groups will be as follows:

For treatment with bacterial vector (with or without pDNA), experimental fish will be transferred from their 40L tank to sterile 4L beakers of water (aerated, 12°C). Appropriate vector will be dosed into the beaker via serological pipette for a final concentration of approximately 107 cfu ml-1, and fish incubated for 1h [18]. Following treatment, fish will be transferred back to their respective 40L tank and maintained as previously described.

Exposure of O. mykiss to purified plasmid or PBS control by intramuscular injection

For injection treatments, fish will be transported to beakers of sterile 4L beakers of water (aerated, 12°C) and an anesthetizing dose of Finquel added. Once visibly anesthetized (attenuated movement and muscle tone, reduced respiration) [20], fish will be treated. A volume of 100μL of purified pIHNV-G or pLUC resuspended in PBS, will be intramuscularly injected (1μg total plasmid), 100 μL PBS, or anesthetized with no injection, Once injected, fresh water will be added and fish were monitored until consciousness is regained, and transferred back to their respective 40L tank and maintained as previously described.

Lethal challenge of O. mykiss with pathogenic IHNV and quantifying response to vectors

After vector or control treatment (14d), fish remaining from each sample group will be challenged with 5×104 pfu ml-1 of pathogenic IHNV [21, 22] for 5h. Mortalities will be recorded daily for 30d after viral challenge. At 1, 3, 5, 7 and 14d post vector treatment, or 3, 5, 7, and 14d post injection, fish will be removed from their respective treatment tanks and euthanized with a lethal dose of Finquel. The spleen and kidneys of each fish will be surgically removed, placed in an RNA stabilization reagent, and stored at -20°C until processing. Organ samples will be homogenized with zirconia/silica beads in a tissue lysis buffer, RNA purified from the homogenate, and synthesis of cDNA performed. Gene expression of Mx-1, Vig-1, TNF-α1, TNF-α2, IFN1 and IFN2 [23] will be measured by quantitative polymerase chain reaction (qPCR) relative to housekeeping gene ARP [24], and analyzed by the ΔΔCt method. In previous studies, levels of expression for the genes of interest in this proposal have been revealed to be altered in fish exposed to IHNV [19, 23, 25].

Salmonids, particularly rainbow trout, are globally one of the most scientifically studied and extensively farmed fish [26, 27]. As previously mentioned, aquaculture is utilized worldwide as a major food production method. This necessitates the demand for economically sustainable disease prevention techniques to help preclude economically devastating loss of business due to mortality. This research proposal aims to validate that an attenuated bacterial vector can effectively deliver a plasmid mediated gene based vaccine for IHNV to rainbow trout in vivo, and invoke an immune response that will protect against future exposure to the pathogen. It is postulated that exposure to 11.29Δdap-pIHNV-G will invoke the most significant immune response in treated fish compared to other treatment groups. Furthermore, this treatment will induce the highest level of protection from a subsequent lethal challenge of IHNV. If successful in this regard, an aquaculture based dosing method exploiting plasmid harboring attenuated bacteria would represent a relatively inexpensive and non-labor intensive vaccination method.

A 16K and 32K cDNA salmonid cDNA microarray have recently been developed and are obtainable through the Genomic Research on Atlantic Salmon Project (GRASP) [28].