The domestic cat Felis catus was originated from the wild cat species, Felis silveteris which distributed from Europe, Middle East, parts of Asia and throughout the Africa continent (Garman, 2000). Cats were first taming in Egypt around 3 600 years ago (Serpell, 1988; Coleman et al., 1997) but the recent finding suggests that the domestication took place earlier in the Fertile, Crescent around 10 000 years ago.

Cats can be categorized into three groups according to where and how they live. The groups are; domestic pet cats, free roaming stray cats and feral cats. Domestic pet cats are those owned by human and their resources are provided by the owners, stray cats are not owned and they freely move however, they are still depending on resources supply by human, meanwhile the feral are those that live and reproduce in the wild and hunting for their resources and needs.

In Malaysia, most household owned at least one cat as a pet and the cat population’s number increases each year (Bedi, 2011). Average animals received monthly are between 600 – 700 animals as reported by The Society of Prevention of Cruelty to Animals (SPCA) Malaysia.

Stray cats are free ranging cats and can be found in and around the cities, towns, rural properties and they are homeless. They are not owned however, they return to human habitation (Ogan and Jurek, 1997) since they are depending on resources that supply by human.

Stray cats could also define as those that escaped home and unable to return or an abandoned cat that seeks its shelter. According to Holton (2007) if a stray cat born in the wild, it can be considered as feral which the free ranging offspring of the domestic cat. Domestic cat’s lifespan as pets are between 15 to 17 years. However for stray cats, estimated time of living is only between 4 to 5 years (Ogan and Jurek, 1997).

Stray cats are usually found in contact with human kind and easily seen foraging for food around the areas where food is abundant such as markets, food courts, on the streets and around the cities. These cats are exposed to numerous types of communicable pathogens such as; rabies, toxoplasmosis and toxocariasis. Stray cats are also good vectors to parasitic organism that are transmittable which can be potentially bringing harm to human’s health. Some ectoparasites can cause skin lesions that are accompanied by pruritus, erythema, excoriation, papules and crusts (Wall, 2007) after fed on animals and as well as on human.

The phylum arthropoda contains over 85 per cent of all known species of animal. Most common arthropod ectoparasites that associated with cats are from class Insecta and class Arachnid. Arthropoda is a Geek word arthros which means a joint and podos means foot. Three basic characteristics of the Arthropods jointed appendages, segmented body and external skeleton.

The entire body is covered with a tough skin called cuticle which in parts is chemically hardened to form a protective exoskeleton. The very simple heart is dorsal, whereas the ganglionated nerve cord is ventral but in the head region it connects to a dorsal large ganglion, often called the brain. The body cavity called coelom, which is the space between the alimentary canal and body wall, is often called a haemocoele because it contains the arthropod’s blood (Macmillan, 1980)

2.4 Physiology and pathogenicity of ectoparasitic arthropods

The small, complex, mobile arthropods usually have a short life, but their populations are maintained at a high level because of the large number of offspring and a short developmental period, usually a few days to a few weeks, although some species require a year or more. The great adaptability of arthropods is evidenced by the evolutionary changes which work to their advantage. Their jointed appendages enhance their capability for dispersal. The body covering of the terrestrial forms provides resistance to desiccation.

The injuries produced by ectoparasitic arthropods are caused directly by the ectoparasite or indirectly by the transmission of disease organisms. Arthropods may cause injury or discomfort through annoyance, blood loss, dermatitis, myiasis, envonomization, and allergy. Direct lesions result from the biting, sucking, stinging, or burrowing of the adult and larval parasites. 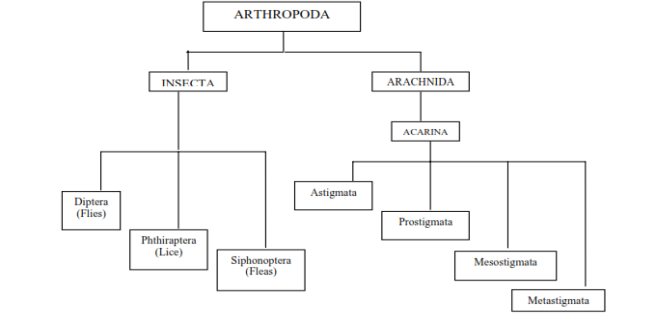 Comstock (1949) stated that there are twenty-six orders categorized under class Insecta. Of these, eight are known to be including parasitic species, while other orders may include incidental and accidental parasites. Members often characterized as tri-segmented bodies, into head, thorax and abdomen. All members have three pairs of legs and usually pairs of wings. Some insects such as fleas and lice are lack of wings.

Generally, members are characterized as segmented body into two parts which are the cephalothorax and the abdomen. There are no antennae or wings. Most adults have eight legs except a few species of mites that only have one up to three pairs of legs (Roberts and Janovy, 2005) .Only subclass Acari that associated with domestic animal, which consists of Mites and Ticks. Acari divided into seven orders. Of these, four orders are known in parasitic species which are Prostigamata (Chiggers), Astigmata (Fur mites), Mesostigmata (Mites) and Metastigmata (Ticks).

Mites have smaller size that enables them to occupy a very wide range of habitats. Most species are free living but there are also parasitic species living on plants or animals included invertebrates and vertebrates (Fain, 1994).Ticks are obligate blood-feeding parasites for cold and warm blooded vertebrates with a worldwide distribution (Cacho et al., 1994).

Stray cats get infested with ectoparasites when they wander outdoors searching for food and most often exposed to accidental ingestion of parasites. Common ectoparasites that associated with cats include fleas, lice, mites and ticks. Previous studies in Malaysia reported parasites infecting the stray cat population from Peninsular Malaysia have given considerable data on the diversity and levels of infection (Lee et al., 1993)

Fleas have a segmented body divided into head, thorax and abdomen. For adult fleas, the thorax consists of six legs. Fleas are small approximately 1 – 8 mm long and yellowish brown to black wingless insects. Adult fleas are laterally flattened; usually brown in colour and readily to jump (Gullan and Cranston, 2005). 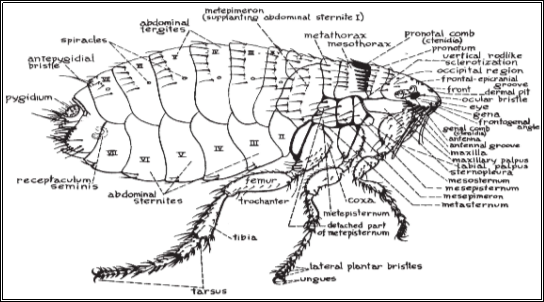 The most common and important cat flea is Ctenocephalides felis (figure 2.6.1). It is a cosmopolitan species and a pest in the urban environment. This species are ubiquitous throughout the world wherever suitable host reside. It is laterally compressed, wingless, about 2mm long and reddish brown to black colour. It has sloping forehead, hind tibia which lacks an outer apical tooth and coombs which differentiate it with other species. The male Ctenocephalides felis is slightly smaller than the female and has complex, snail – shaped genitalia.

Fleas undergo a complete lifecycle which consists of egg, larva, pupa and adult. Immature stages of flea do not resemble the adult and occupy very different ecological niches. On average an adult flea lives for 6 to 12 months and has been postulated to live for 2 years. A female adult flea can mature eggs and may lay 300 to 1000 eggs over its lifetimes in average 3 to 25 eggs per day, if it has access to its primary host. According to Rust and Dryden (1997), about 15 eggs fall into the soil or the carpet. The eggs then hatch and produce larvae that crawl in the environment to feed. Flea larvae are elongate, have no legs and are sparsely covered with long setae. They have small head with simple antennae but lack eyes. They feed on organic debris found in the nest or house of the host. The larva undergoes two moults before becoming the third – stage larva before developing into a silken cocoon. It remains in the pupa for 1 to 2 weeks before the adult flea emerges spontaneously from the pupal case when they sense the presence of an appropriate host.