Anxiety is an unpleasant feeling of nervousness, uneasiness accompanied by stress for anticipated events. Stressful conditions can increase anxiety many folds showing physically noticeable symptoms and drastically affecting cognitive ability. Several anxiolytic drugs are in the market whose continuous consumption may lead to problems in the long run. It is reported that L-Theanine, anamino acid analogue that was discovered as a constituent ingreen tea, has anxiolytic abilities. As L-theanine is an analogue of glutamate and glutamine, it is absorbed in the small intestine after oral digestion. It can cross theblood–brain barrier, and thereby directly register pharmacological effects. As it is able to cross theblood–brain barrier, psychoactiveproperties are reported for theanine. Many studies have revealed about its potential ability to reduce mental and physical stress. It can give better cognition and improve mood and cognitive performance. Diazepam is acommercially available benzodiazepine drug, used to treat a wide range of conditions,  including anxiety, panic attacks, insomnia, seizures etc. In this paper, the anxiolytic properties of L- theanine was studies in the albino rats taking diazepam as a positive drug for anxiety. Poly lactide nano particle encapsulate theanine was also tested to see if it could cross the blood brain barrier more rapidly to reduce anxiety. Theanine proved to be an efficient anxiolytic drug equivalent to diazepam as it improved the performances of anxiety induced rats to match with that of the rats that were non anxious.

Nowadays anxiety or stress have became one of the common important problem faced by the world today. Owing to busy schedule and workloads people are not able to stay calm and so the demand for anti-anxiety drugs are gaining importance. Most commonly used drugs include alprazolam, clonazepam, diazepam and oxazepam. But all these drugs are not safe in the long run and hence there is a need for a good alternative.

L-theanine, an aminoacid analogue of proteogenicaminoacids, L- glutamate and L- glutamine has found to have certain anti- stress effect properties. It was discovered as a constituent of green tea. Since it has multiple roles in the central and autonomous nervous system, it is receiving more attention. It was found that administration of L- theanine increases the alpha brain activity, depicting that L-theanine could render an alert and relaxed state [1,2].It was also found that stress can be reduced by inhibiting cortical neuron excitation [3].Stress can raise the blood pressure thereby activating the nervous system for producing large amounts of vasoconstricting hormones that will elevate blood pressure [4,5], L-theanine was able to reduce the blood pressure Various studies in animals revealed that L-theanine had an effect on serotonin and dopamine concentrations in the brain, anxiolytic effect [6,7].

Kimura (2007) reported that intake of L- theanine have reduced heart rate and salivary immunoglobulin production. In hypertensive rats L-theanine have found role in reducing blood pressure [8,9].. Hence, it can be hypothesized that L-theanine attenuates the stress responses in the autonomic nervous system induced by both physically and psychologically stressful tasks.

Diazepam is one of the common benzodiazepine drug used for reducing anxiety. It reacts with the chemicals in the brain that causes anxiety. It also used for alcohol withdrawal symptoms. With other medications, diazepam is used to treat seizures. It helps to control symptoms of anxiety, so the people feel less agitated and less tense. It have sedative and an anticonvulsant properties. It can help relieve to muscle spasm. Diazepam should be used for the shortest period of time possible as it will cause tolerance, dependence and also sometimes withdrawal symptoms in some people.

In this paper, the effect of theanine was tested in the albino mice taking diazepam as a positive drug for anxiety and then testing of theanine encapsulated with nanoparticle was done to check whether the drug crossed the blood brain barrier.

All animals used for this experiment were approved by the ethical committee for animals of VIT University.

All rats used in the experiment were female albino Wistar from VIT animal house.

The animals were in the age group of 6-8 months. The separated groups were kept in separate cages with 3 rats in each cage and were fed with food pellets and purified water from VIT animal house facility. All rats were healthy and free of any physical deformity or possible symptoms of any infection. The mean weights of the rats were 270 ±10 grams.

Grouping of the rats for the experiment:

The rats were divided into 5 groups with 3 rats per group for the experimental design. The details of the groups are as follows.

Restrain stress model was used to induce anxiety into rats. All rats except the negative control group were induced with anxiety continuously for 5 days. The rats were locked and immobilised in the restrain stress chamber inside a silent dark room for 1 h each day for 5 consecutive days to induce anxiety. No animals were injured or handled harshly in the process.

Each group of rats were subjected to the process at the same time each day and were then caged together in their respective group cages.

The drug was administered orally through eleven G syringe. Drug of 10 mg/ Kg of body weight was dissolved in 10 mL of distilled water and were fed orally to the rats.

Open field test and elevated plus maze test was performed for each rat in every group for 3 consecutive days and the performance readings were recorded for each rat and represented separately in the group performance table to be compared with other groups to determine the relative anxiety levels of different groups in the experimental model.

The rats were introduced one at a time into the centre of the open field setup that consisted of 16 squares and a total accessible area of 1.6 sq m. The ambiance was maintained silent and was well lit with lights for ensuring visibility. Each rat was allowed to spend 10 mins inside the setup and the total number of square movements, fecal boli and rearings were recorded for the entire period of time spent inside the setup.

The rats were introduced one at a time into the centre of the elevated plus maze setup elevated to 50 cm above ground that had an open arm of length 60 cm and a closed arm of length 60 cm with the total accessible area of 2.4 sq m. The ambiance was maintained silent and was well lit with lights for ensuring visibility. Each rat was allowed to spend 5 mins inside the setup and the total number of open arm entries, closed arm entries, total time spent in open arm and total time spent in closed arm were recorded for the entire period of time spent inside the setup.

The observations of the open field test and elevated plus maze test for all the groups of experimental rats are as follows.

Table 1 to 5 show the raw data of observation for the 5 groups for the open field test.

Table1: Group I observation for OFT

Determining the level of anxiety:

The mean value of squares crossed by the rats in each group is depicted in fig 1. 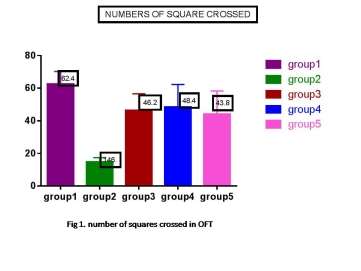 Fig 2. Shows the anxiety level of the different groups having fecal boli as the parameter for measuring anxiety. 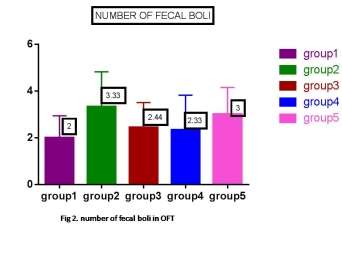 Mean number of rearing behaviour for the 5 groups are shown in fig 3.

Group I rats that were expected to show the least number of rearings showed rearing behaviour more than the test groups. Group II rats showed the maximum mean number of rearings fo 32.2 in 10 mins in the open field setup. Theanine and nano particle formulation of theanine reduced the rearing behaviour as compared to diazepam proving their efficiency as anxiolytic drug. The effect of normal drug and nano particle formulation were almost equal and nano formulation seems to show no improvement in crossing the blood brain barriers. 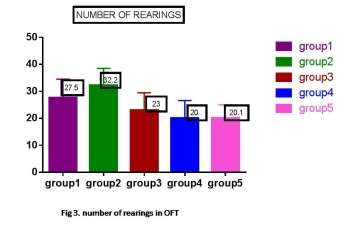 These results from open field test confirms that the restrain stress model is effective in inducing anxiety in rats and the test drug theanine performs better than diazepam that is now being commertially used to treat anxiety.

The parameters tested in the elevated plus maze test were

Tables 6- 10 show the raw data collected for each group of rats in the elevated plus maze test.

Table 6: Group I observations for elevated plus maze test

Mean number of open arm entries by the 5 groups of rats in elevated plus maze test are depicted in fig4.

Group I rats with no induced anxiety showed the maximum mean open arm entries of 13.4 times in 5 mins. The least number of open arm entries were observed in group II rats that were induced with anxiety but not administered with any drug. 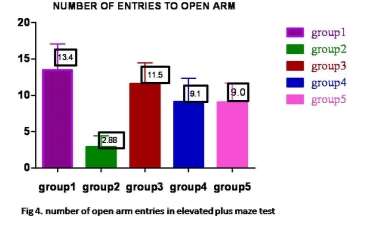 The mean number of closed arm entries for the groups of rats are shown in fig 5. 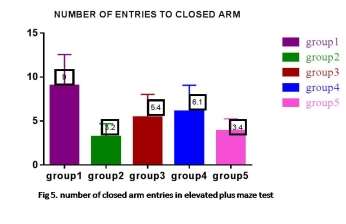 The mean time spent in the open arm by each group of rats in the elevated plus maze setup is shown in fig 6.

Rats belonging to group II that were induced with anxiety but were not administered with any drug spent the least time in open arm proving increased level of anxiety. Rats with induced anxiety and administered with diazepam, theanine or nano formulation of theanine spent mean time of 2.96, 2.7 and 2.93 mins in the open arm respectively. These are higher than 2.5 mins of time spent by group I rats that were not induced with anxiety. This proves that level of diazepam and theanine administered were able to reduce anxiety and also improve the performance of the test rats more than the control group in this test. 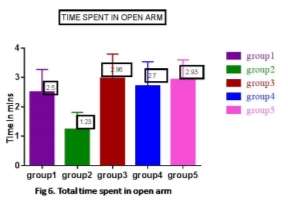 Mean time spent by different groups of rats in the closed arm of elevated plus maze setup is given in fig7.

Group II rats spent the mean maximum time of 3.76 mins in the closed arm showing maximum level of anxiety as they were not administered with any anxiolytic drug.

Rats administered with diazepam spent the least time in the closed arm that was about a mean value of 2.03 mins. Theanine and nano particle formulation of theanine showed no variation with respect to this parameter as both the groups administered with either one of the drug spent an equal mean time of 2.3 mins in the closed chamber. These values are lower than the time spent by the non anxious rats in group I thus making it clear that the amount of diazepam and theanine used have not only been anxiolytic but also have improved performances of the rats in the test. 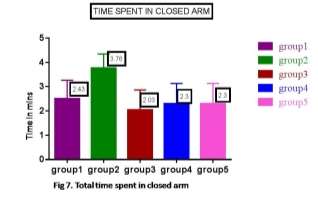 Relative time spent in open arm for each group of rats with respect to non anxious rats were calculated and depicted in fig 8.

Relative time spent by the group2 rats with anxiety and no administered drug was lowest as expected. Rats administered with diazepam, theanine or its nano formulation showed 18 %, 8% and 17% high relative time respectively as compared to the non anxious rats used as control, showing the effectiveness of the drug against anxiety. 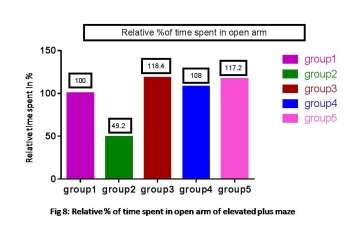 Relative time spent in closed arm for each group of rats with respect to non drug administered rats in group2 were calculated and depicted in fig 9.

Time spent by the rats in group II that were induced with anxiety but not administered with any drug was taken to be 100% and the time spent by other groups were plotted relative to this.

As expected all the other groups of rats showed lower relative time in the closed arm proving lower level of anxiety than the control group II. Rats administered with diazepam spent the least relativ