Antisense Technology and Its Applications

ANTISENSE TECHNOLOGY AND ITS APPLICATION

The tool that is used for the inhibition of gene expression is called Antisense technology. The antisense nucleic acid sequence base pairs with its complementary sense RNA strands and thus prevents it from being translated into a protein. The complementary nucleic acid sequence can be either a synthetic oligonucleotide, like oligodeoxyribonucleotides (ODN) having less than 30 mucleotides or longer antisense RNA (aRNA) sequences (Sczakiel, 1997). Example of sense and antisense RNA is: 5’ A C G U 3’ mRNA, and 3’ U G C A 5’ Antisense RNA.

Dr. Hal Weintraub first developed this technology at Basic Science Division. Firstly, they showed that aRNA inhibits the gene expression in mouse cells by Berg, 2002. Dr. Meng-Chao Yao in 1996 showed that aRNA that was incorporated into non-conserved regions of ribosomal RNA (rRNA) disrupts translation and this was done by altering interaction of the mRNA, and the rRNA, mRNA chimera.

Sequence transcription of antisense DNA strand into the sense mRNA strand, which is then translated into polypeptide (Kimball, Nov 2002).

The inhibition in which the theory works are as follows: 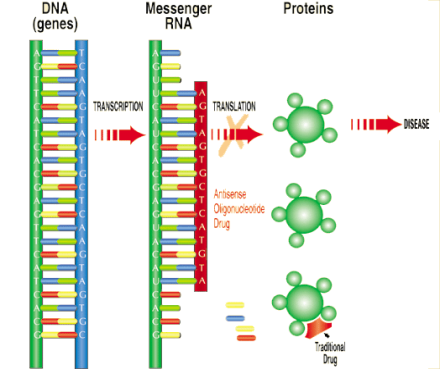 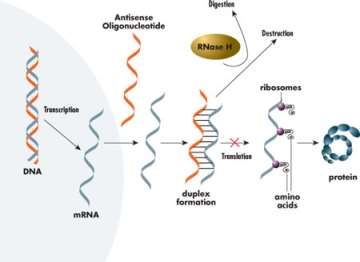 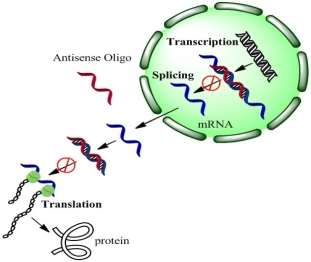 Oligonucleotide-based antisense techniques represents the most successful approach to genetic message element. Zamecnik and Stephenson first demonstrated the antisense effect of synthetic nucleotide. Zamecnik and Stephenson identified a repeated sequence of 21 nucleotides (nt) that was crucial to viral integration with the help of nucleotide sequences from the 5’ and 3’ ends of the 35S RNA of Rous sarcoma virus (RSV). They synthesized a 13-mer oligonucleotide, d(AATGGTAAAATGG), complement to the portion of this viral sequence. Viral production got inhibited when synthetic oligonucleotide was introduced into cultured fibroblast cells.Thus, they concluded that oligonucleotide was inhibiting viral integration by hybridizing to the crucial sequences and blocking them. They introduced the term ‘hybridon’ to describe such oligonucleotides.

The three possible sites are Base, Ribose (2’ OH group) and the Phosphate backbone.

In RNA nucleotides the 2’ hydroxyl group, missing in DNA nucleotides, can be modified. The alteration was thus introduced in the protective modifications of nucleotides that protects against the nuclease degradation which does not at the same time eliminates the desired effect of the oligonucleotide sequence by blocking the complementary hybridization or harming of the cells.

In the late 1960s, Eckstein and colleagues successfully introduced the first-generation antisense-motivated nucleotide modification. They replaced one of the non-bridging oxygen atoms in the phosphate backbone with a sulfur atom. This modification was called as phosphhorothioate that achieved the goal of nuclease resistance measured by an increased half-life for a phosphorothioated oligonucleotide upto ten hours in human serum as compared to that of one hour of an unmodified oligonucleotide having the same sequence. Moreover, Matsukura and colleagues demonstrated that phosphorothioated oligonucleotides were effective hybridons against the HIV replication in the cultured cells. On the other hand, phophorothioated oligonucleotides displayed slightly reduced hybridization kinetics and a tendency towards unspecific binding with certain proteins which resulted in cytotoxicity at high concentrations. Thus, the dose-response was added to the mix of issues for antisense agents and hence the useful modifications continued.

The so called second-generation class of modifications directly addressed the non-specific and cytotoxic issues which was raised by the phosporothioates by the introduction of RNA oligonucleotides with alkyl modifications at the 2’ position of the ribose sugar. The two most important of these modifications are 2’-O-methyl and 2’-O-methoxy-ethyl RNAs. Antisense nucleotides contains these modifications and displayed the nuclease resistance in concert with lower toxicity and major drawback of 2’-O-alkyl modifications is that the antisense agents containing them are unavailable to the most powerful antisense mechanism called RNase H cleavage. Steric block mechanism are affected from these agents. Thus, the 2’-O-methyl oligonucleotides have been used to increase the desired expression of alternate splices in certain proteins by suppressing the undesired splice variant.

Since RNase H cleavage is the most desirable mechanism for antisense effect. Nuclear resistance rarely have 2’-O-alkyl modifications which is a hybrid oligonucleotide, constructs incorporating both the characteristics has been appeared in the form of the “gapmer” antisense oligonucleotide, containing central deoxynucleotide blocks sufficient to induce RNase H cleavage which was flanked by the blocks of 2’-O-methyl modified ribonucleotides, thus protecting the internal blocks from nuclease degradation and these irrelevant cleavage appears because of binding short stretched nucleotide in most of the genomes. For example, a 15-mer can be viewed as a series of eight overlapping 8-mers. mRNA has less potential random targets, while in RNase H cleavage it is still high. This theoretical potential became real in the case of 20-mer phophorothioate oligonucleotide targeted to the 3’-untranslated region (UTR) of the protein kinase C alpha gene (PKCα).

Ribozymes are RNA enzymes were first described by Cech in Tetrahymena thermophilia. Antisense agents immediatley seized the RNA processing capabilities of these enzymes. Thus, the hammerhead ribozyme was characterized. This enzyme was first isolated from viroid RNA by Ulhenbeck and Haseloff and Gerlach.

RNA interference (RNAi) was first described by Fire and colleagues in Caenorhabditis elegans. Long-double stranded RNAs were introduced into C. elegans. RNAi generated enormous interest by both those who view it as a potentially powerful antisense tool and recognize it like ancient eukaryotic cellular defense mechanism. 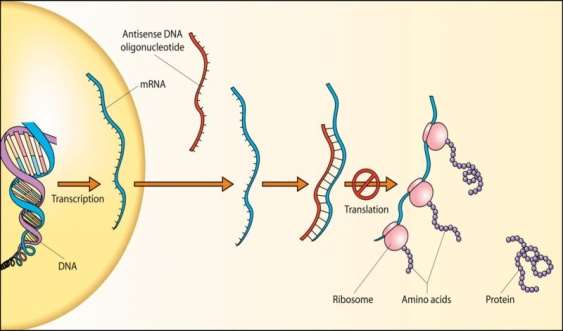 The overall goal in introducing an antisense agent into the cells either in vitro or in vivo is to suppress or completely block the production of the gene product. The normal transcription and translation is affected due to transition between DNA and amino acid sequence. DNA strand is transcribed into pre-mRNA at step one. In step two, through the action of 3 separate processes like 5’ capping, intron excision and polyadnelyation, pre-mRNA is converted into mature mRNA. In step three, transportation of mRNA is carried out in ribosomes into the appropriate poly-peptide.

The first target is transcription step to achieve antisense knock-down or knock-out, in which antisense agent is targeted to DNA itself, thus preventing transcription of the primary message. Dagle and Weeks noted that there are three ways in which this strategy can be carried out viz, minor groove binding polyamides, strand displaying PNAs, and major groove binding , triplex forming oligonucleotides. According to White at al, pyrrole-imidazole are minor groove binding polymers that achieve sequence-specific action through side-by-side pairing of pyrrole and imidazole amino acids. Less than 7bp appears in the target sequence of short stretched DNA. While PNA agents are longer and their mode of operation binds to complementary strand of DNA helix, displacing the complement. This process is thus aided by the fact that PNA:DNA duplexes are more stable than the DNA:DNA duplexes so that former is thermodynamically favored over the latter duplex. Triplex forming oligonucleotides have longer sequences and these agents create stable triplex DNA instead of binding to one of the DNA helix, while displacing the other helix of DNA. Both involves the interaction of TFO having purine bases in a polypurine:polyrimidine stretch of duplex DNA. Watson-Crick bonded is the target dsDNA sequence and triplex forming oligonucleotides binds to duplex through Hoogsteen hydrogen binding: T-A:T and C-G:C triplets. This strategy necessitates that only the purine-pyrimidine dsDNA can be targeted and the cytosine in TFO must be protonated. Thus the cytosine protonation is due to the requirement for the acidic conditions. Sorensen et al reported that the LNA containing TFOs stabilizes the triplex formation at physiologic pH. A 15-mer having seven LNAs raised the temperature for the triplex to duplex transformation from 33°C to ~66°C at pH 6.8.

Finally the most used mechanism is that of the RNase H degradation of mRNA. RNase H is an endogenous enzyme which cleaves the RNA moiety of an RNA:DNA duplex. In both cytoplasm and nucleus, RNase H is found. During DNA replication it removes the primers of RNA from Okazaki fragments. The most powerful weapon assessing functions of gene is called RNase H activation antisense.

Kurreck thus listed 15 antisense oligonucleotides in total that are used in clinical trials against the diseases like cancer and asthama. 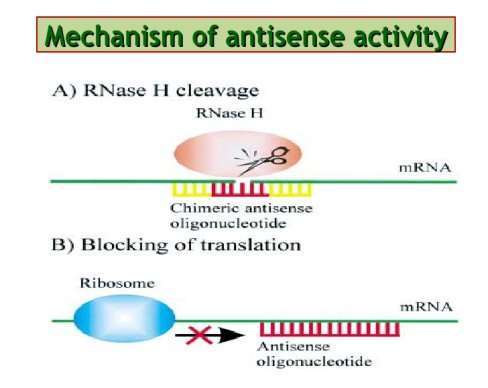 James Watson and Francis Crick proposed deoxyribonucleic acid, which consists of two deoxyribonucleotide molecules each having 5’and 3’end that defines a polarity for the DNA strand. After binding of these strands in antiparallel orientation 3’ of one being juxtaposed to 5’end of the other, they compose a complete DNA molecule. The two stands are bound together by pairing four complementary bases in each strand such that adenine present on one strand binds to second thymine, while cytosine binds to guanine in the second. Each strand contains all the genetic information called as mirror image. This structure permits transmission of genetic information by allowing a complementary strand produce for a single strand. One strand can therefore produce an entire DNA molecule, occurring during the cell division.

Each triplet set of nucleotides on a strand of DNA encodes an amino acid. In this process, one or another portion of one strand (a gene) is copied by ribonucleic acid polymerase II producing a compelementary molecule of ribonucleic acid, or RNA. This messenger RNA (mRNA) therefore, contains the same information which is contained in the gene that has been transcribed. Mature RNA molecule is left when the introns are excised. RNA molecule is thus exported to the cell, directing protein synthesis at ribosome. This takes place after intron excision and additional process. 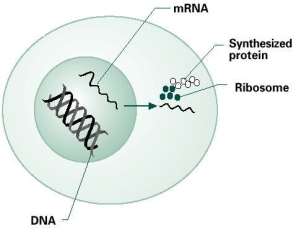 DNA/RNA physiology is applied in various methods. Antisense technology is the most important application used. Here, oligonucleotide is introduced into cell which binds to its target mRNA through complementary based-pairing. This binding forms RNA dimer in cytoplasm and halts the protein synthesis.

Antisense technology is used successfully in two general areas. The first one is fundamental research where antisense oligonucleotides introduced helps to determine the role of a specific gene. Cell growth and other changes occurred due to the production of angiotensin II. Cellular renin angiotensin system played an important role in variety of cardiovascular disorders like artherosclerosis and vascular hypertrophy.

Oligonucleotides were developed to inhibit the synthesis of angiotensin as it was difficult to demonstrate cellular system to be operative. It is a substrate form which the cells make angiotensin II. Cells make their own angiotensin II having growth promoting effects with the help of this technology.

The most widely used application of this technology is in gene therapy. In this case, a variety of vectors are used to introduce antisense encoding genes into larger number of cells in a patient or animal to produce long term inhibition of protein. For example, vectors having angiotensin II receptor sequences when introduced in animal models can cause long term normotension in hypersensitive animals.