Every year, thousands of chemical and biological entities are developed in the hope of making it to the shelf. The drug development process is the progression by which drugs will either be approved or not approved for use, and spans from discovery and preclinical testing to Phase IV of Clinical Trials (post marketing surveillance). The underpinning aim is to ensure the safety and efficacy of a drug before it can be approved for use. Given that only one in every 5,000 to 10,000 compounds that enter preclinical testing are approved for marketing, and that an average of 15 years is required to take a drug through the complete process, the drug development process is a long and costly one.

The two main regulatory bodies in the world are the FDA (USA) and the EMA (EU) and while the drug approval process varies from the EU to the USA, the basic regulation process remains the same.

1.1. Drug approval process in the US

In brief, the process of drug approval in the US first involves the submission of an Investigational New Drug application by the Sponsor. This allows the Clinical Trials to commence once the data from the Preclinical trials shows that the drug is safe. Once the drug is shown to be safe and effective (Clinical Trials data), a New Drug Application is filed which is essentially an application to manufacture and sell the drug (Rick, 2009).

1.1. Drug approval process in the EU

As mentioned before, the purpose of the drug development process is to ensure safe and effective drugs are available to the patient. However, both the US and EU processes are very lengthy procedures and often do not provide rapid patient access to drugs. There is of course a balance to be struck between providing patients with rapid access to medicines and ensuring adequate information is available regarding the risk-benefit factors of the drug, sometimes termed the “evidence versus access” challenge (Eichler et al., 2015).

In recent times however, much has been done to try and improve the situation (Baird et al., 2014). In the EU, there are two means to fast track approval of a drug; Accelerated assessment and Conditional marketing authorisation.

The Conditional marketing authorisation process allows ‘the approval of a medicine that address unmet medical needs of patients on the basis of less comprehensive data than normally required. The available data must indicate that the medicine’s benefits outweigh its risks and the applicant should be in a position to provide the comprehensive clinical data in the future’ (EMA, 2015). In 2014, the EMA initiated a pilot project for a new model of drug testing and marketing called Adaptive Pathways (also known as Adaptive Licensing, or more recently the terms Medicines Adaptive Pathways’ (MAPs) or ‘Medicines Adaptive Pathways to Patients’ (MAPPs) have been used). This concept allows new drugs that would treat “unmet medical needs” to be launched on the market faster, based on an incomplete data set (Davis et al., 2016).

2014 saw the introduction of a pilot program by which drugs could potential to make it to the market faster in order to fulfil unmet medical needs, the Adaptive Pathway. The idea was to ensure timely patient access to new drugs, while ensuring adequate risk benefit information was available. The Adaptive Pathways model presented by the EMA is not a new route of marketing authorisation but rather makes use of existing regulatory approaches such as the conditional marketing authorisation or the standard marketing authorisation. Using this pilot program, drugs could be authorized conditionally or in a staggered fashion using data gathered throughout the life of the product.

The three key principles of Adaptive Pathways are;

Bearing in mind that drugs are approved through adaptive pathways based on incomplete data and are given market approval earlier in the development process, iterative development refers to the gathering of data to increase knowledge after authorisation. It is a staggered approach to widen the target population or expand the indication. The data collected can also be used to reduce any uncertainties that were present at the early approval stage.

A key component of Adaptive Pathways is a well-defined prospective plan for collecting real-life data that can be used in conjunction with the Clinical Trials data to enhance the risk benefit ratio (Eichler et al., 2012).

Communication between stakeholders is critical and helps to decide what medicines are suitable, and are also responsible for creating an agreed prospective plan required for data gathering throughout the lifecycle of the product. Stakeholders are involved from a very early stage and can include health technology assessment (HTA) bodies, patients, as well as regulators and healthcare professionals.

2.2. Benefits and challenges of Adaptive Pathways

The obvious advantage of the Adaptive Pathway is that the patient can potentially have access to a drug in a much shorter time period than if the drug had to go through the standard application process. If the drug shows a good risk benefit outcome, the drug can be approved at an earlier stage, while real-life data is gathered at predefined intervals from patients to confirm effectiveness. There is also the opportunity for drugs to be fully approved within a shorter timeframe than normal.Â  Eichler also suggests that this process “may reduce the overall cost of development by allowing better-informed decisions on product viability to be made earlier in the development process” (Eichler et al., 2012). Eichler has published an article detailing the enablers of this new concept (Eichler et al., 2015).

However, since the publication of the EMA’s final report in July following the completion of the pilot program, a number of articles have been published which criticise the new concept (Eichler et al., 2012) (Woodcock, 2012). Unlike the standard authorisation, the Adaptive Pathway uses preliminary data and omits a number of steps that were designed to protect patients from unsafe and ineffective drugs and, this raises concerns as to whether this can potentially lead to increased risk to the patient.

For adaptive Pathways to work, it is critical that evidence obtained after initial approval be taken into consideration. However, it has been found that healthcare professionals are often slow to abandon unsafe methods (Tatsioni et al., 2007). This is worrying as the basis of Adaptive Pathways is that reliable data is generated after authorisation that will shed more light on the risk benefit to the patient.

Another serious concern relates to the life cycle management of the new drug (Davis et al., 2016). As mentioned earlier, a key principle of the Adaptive Pathway is gathering real-life evidence in post-marketing studies that would be used to update the risk benefit information. However, it would seem that in the case of conditionally approved drugs, the regulatory bodies have failed to ensure post-marketing study commitments are followed through (Banzi et al., 2015). It has also been suggested that where undesirable findings are encountered, companies may dispute these as unreliable results (McCabe et al., 2010) or may discount them because there are large financial gains or reputations at risk (Prasad et al., 2012).

Moreover, the willingness of stakeholders to participate in a program that involves more uncertainty, and correspondingly perhaps more risk, than before will be one of the greatest challenges to the Adaptive Pathway.

The report issued by the EMA suggests that drugs that treat infectious diseases, Alzheimers disease, degenerative diseases and rare cancers are potential candidates for this process with the objective of furthering their development and that suitable for the Adaptive Pathways would be those that treat rare diseases, where clinical data is not that common. The EMA have provided a flowchart to help companies determine if a product is an appropriate candidate or not, (Figure 2). Based on this, the key features of a drug that could be deemed suitable for this Adaptive Pathways approach are; iterative development, collaboration with HTA, and the use of real time data for regulatory purposes. 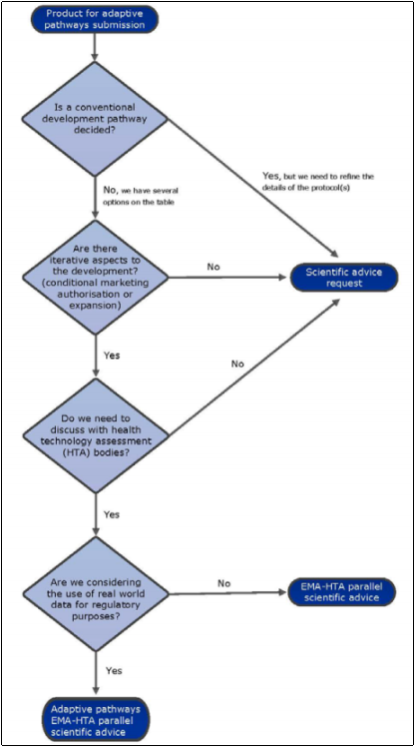 While there is no strict restriction on what type of drugs are eligible for the Adaptive Pathways, the EMA states that this route is not “to be applicable to all medicines, but only to medicines that are likely to address an unmet medical need”(EMA, 2016). During the pilot, 62 applications were received from a variety of therapeutic areas with cancer therapies accounting for a large proportion (33%). It is worth noting that Orphan designated drugs are suitable candidates, with 5 making it through to Stage 1 Meetings (15 drugs had been given Orphan drug designation by the European Commission at the time of submission) (EMA, 2016). 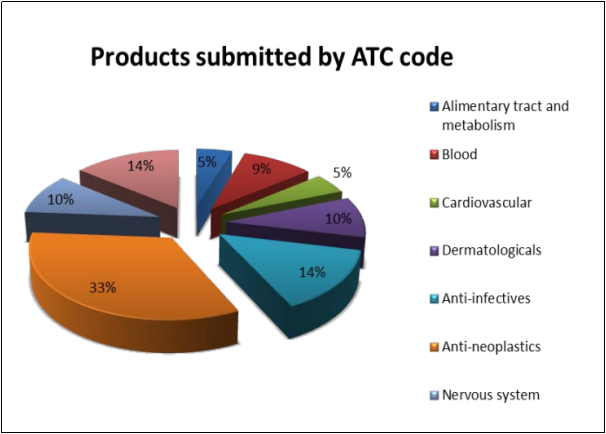 Within the USA, there are four approaches to getting drugs on the market as rapidly as possible, and in each case the drug must be intended to treat a serious condition. A serious condition is defined as a disease or condition associated with morbidity that has a substantial impact on day-to-day functioning

Fast Track refers to the process, approved in 1992 under the Prescription Drug User Fee Act, by which drugs needed to treat serious conditions or to fulfil unmet medical needs are rapidly approved. According to the FDA, “filling an unmet medical need is defined as providing a therapy where none exists or providing a therapy which may be potentially better than available therapy” (FDA, 2014). This strategy means more communication with the FDA regarding the drug development plan, data collection and clinical trials design. In addition, a Fast Track designated drug is potentially eligible for Accelerated Approval and Priority Review if it meets the applicable criteria.

Breakthrough Therapy designation accelerates the development of drugs needed to treat serious conditions that have shown substantial advantages over existing treatments in early clinical studies (Poirier and Murphy, 2016). This strategy utilises a surrogate endpoint. A surrogate endpoint is a marker used to determine effectiveness of a drug, such as the shrinking of a tumour and is often used rather than actual clinical endpoints, such as survival rates. Another example would be a significantly improved safety profile compared to available therapy (FDA). In addition to the Fast Track designation benefits, Breakthrough Therapy drugs receive a vast amount of guidance with the drug development program.

AL is expected to involve a trade-off between earlier access for some patients vs. an increased level of acceptable uncertainty about benefits and risks, although the degree of uncertainty is expected to diminish with additional evidence generation.

One of the main purposes of the AL scheme is to get more robust and more relevant data earlier and throughout product development. Any attempt to move toward a more adaptive approach would have to be complemented by appropriate communications to key stakeholders and assurance that the appropriate post-initial authorization capabilities exist for ongoing monitoring of medical products for which AL has been applied